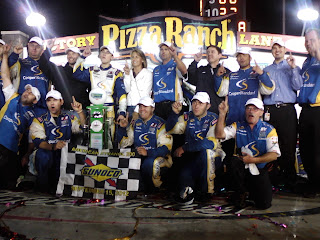 With his win at the American Ethanol 200 at Iowa Speedway, Eighteen year old Ryan Blaney has become the youngest ever winner in the NASCAR Camping World Truck series and the 7th first time winner of the 2012 season. 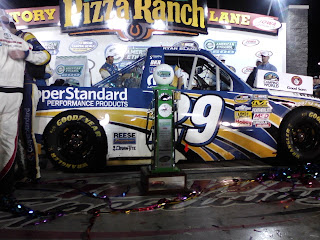 The soft spoken driver was a guest on Speedtalk on 1360 radio Saturday morning, he was fastest in final practice and qualified second for the race.  Ryan then spent the rest of the day doing interviews and promotional appearances all around the track.  His dad Dave then wrapped up his duties at Chicagoland and made his way to Iowa Speedway. 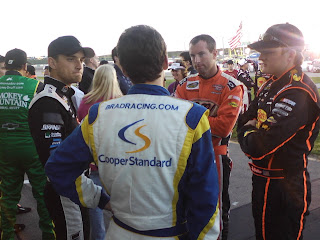 The younger Blaney (back to camera) then spent most his evening near the front of the pack, he lead 50 of the 200 laps and drove a smooth clean race, even though chaos ensued behind him on some wild four-wide restarts.

Ryan Blaney mentioned that since moving over to Penske he has worked hard to improve his driving and technique on pit lane, to be as quick and mistake free as possible.

This also is the first win for Brad Keselowski Racing, Blaney said he had not talked to Brad yet because his phone was off, but when he does, the first thing he will say to Brad is "thank you for this opportunity."

Parker Kligerman (below) was fast qualifier and lead 107 laps but was involved in an accident on lap 181 after gambling on fuel strategy and finished 23rd. 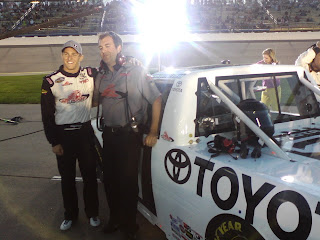 Listen for interviews with Todd Bodine, Cale Gale, Drew Herring and Jeff Choquette on Speedtalk on 1360 Saturday morning 10-11am on 1360am or www.krwc1360.com

Here is the audio recap of the race including interviews heard on Speed Talk on 1360 radio;  https://soundcloud.com/speedtalkon1360/2012-truck-series-at-iowa-m4a