A local racer is making a name for himself in motorsports, but maybe not the way that he originally planned, he is one of the hottest names in Monster Jam and was named the 2017 Rookie of the Year. 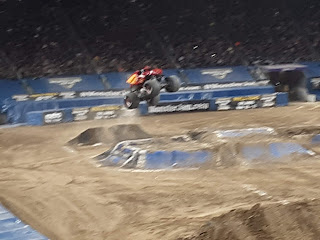 You might remember Camden Murphy (22) from Itasca (IL), he started his career by racing locally in Karts and Legends Cars before stepping up to the UARA Late Models and the Midwest Truck series.  He won the Midwest Truck feature at the famed Thunderstruck93 event at Elko Speedway (MN) in 2013, it was his first ever Truck win. “I always loved ELKO, I remember that day being all about survival, we were having some bad luck and then everything just turned our way, it’s a day I will never forget,” said Murphy “especially being in that unique victory lane.”  He edged out Jacob Van Wazer, Natalie Decker and Jerry Wood on that day. Link to 2013 #Thunderstruck93 article CLICK HERE
Murphy had numerous wins in the Midwest Truck series and narrowly lost the title to Derek Kraus in 2015.   Since then Murphy has been searching for the right opportunity and financial support to make a living in motorsports.  Murphy has had 21 total NASCAR starts driving for small underfunded teams like: Rick Ware Racing, Copp Motorsports, JJC Racing and Beaver Motorsports in the NASCAR Truck series and 1 start in the NASCAR Xfinity series, he has never scored a Top 10 finish.
“With the struggles of finding funding I looked for as many different avenues in Motorsports that I could, knowing that driving is all I wanted to do,” said Murphy “I found myself with the opportunity to go to Monster Jam University.”  Murphy made the most of that opportunity working directly with 11-time World Finals Champion Tom Meents, he impressed the right people and got a job driving a 12,000 lb Monster Truck. Now funding is not an issue, he has equal equipment to the best drivers in Monster Jam and he has excelled.
Murphy has quickly become one of the hottest new stars on the premier Stadium Tour of Monster Jam.  After driving a new truck named Pirate’s Curse last year, he is currently behind the wheel of Bakugan Dragonoid, a wild looking truck designed from the Japanese animated cartoon and video game.
Every Monster Jam event now is divided into three competitions (Racing, Two-Wheel Skills and Freestyle) with the fourteen trucks taking part in each competition, fourteen points for first on down to 1 point for last.  The points are tallied at the end of the night to determine the Overall Champion.
US Bank Stadium in Minneapolis (MN) hosted Monster Jam on Feb 16th and Cameron Murphy won the Racing competition beating John Gordon in Bad Company in the finals and earlier defeating monster truck royalty Ryan Anderson (son of pioneer Dennis Anderson) in Son-uva Digger, it was the fourth racing win for Murphy.  He then thrilled the 30,000+ in attendance with an incredible show of driving skill balancing his monster truck nose down with a stoppie on its front wheels and walking it across half the stadium, he scored a 9.4 besting rising star Morgan Kane who was driving Grave Digger, it was the second two-wheel skills win of the season for Murphy.  He then performed a backflip and finished 6th on his freestyle behind his mentor Tom Meents driving Max-D. With his two wins Murphy scored enough points to take his second overall event Championship with Ryan Anderson finishing runner up. Camden Murphy was the star of the show on this night. 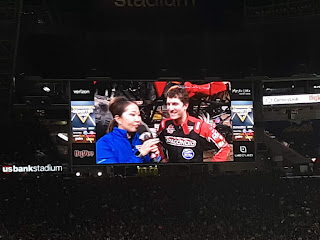 Even with all of his success in Monster Jam, Murphy has not forgotten about his NASCAR dream.  “As of right now, I am fortunate enough to have many opportunities on all 3 levels (of NASCAR).  However I am limited due to lack of funding, as many drivers can relate” said Murphy. “All I can say is that you will find me in a seat almost every weekend, be it racing or start-and-parking, you’ll find me somewhere.”  Murphy hopes to make his 2019 NASCAR season debut either in California or Texas.
There is no doubt that he has now proven that in equal equipment, Camden Murphy can win behind the wheel of a Monster Truck and has become one of the best drivers in the series.  Hopefully someday that local racer will be given the very same opportunity in NASCAR. Somebody please tell that Japanese company that NASCAR fans like Dragons too.
Posted by Jason at 4:33 PM No comments: