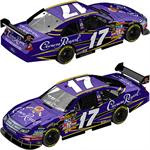 Send us your pick on WHO will WIN the NASCAR Sprint Cup race at Daytona on Saturday night. If you are right you could win an awesome 1:24th die-cast race car courtesy of http://www.speedworksdiecast.com/
(if more than one person picks correctly, we will do a random drawing). The car will be shipped to you for FREE.


Lance from http://www.speedworksdiecast.com/ has a newly designed web-site and is a big supporter of Motorsports in Minnesota. They are your full-line dealer for NASCAR, NHRA, World of Outlaws, and the IZOD Indy Car series.
Just e-mail your pick of WHO WILL WIN Daytona to speedtalkon1360@live.com or call in your pick during our radio show on Saturday morning (July 3rd) from 10-11am on KRWC radio and www.krwc1360.com
Any driver could win Daytona, E-Mail your pick now!
Last time we did this contest Wayne Warnest from St Paul was the winner.
Posted by Jason at 5:49 PM No comments:

MN Driver Nick Murgic took the early lead after Jeff Storm brought out the first caution. Murgic lead over 70 laps but then faded back to finish sixth.

NASCAR star Tony Stewart was stuck back in the pack but finished on the lead lap in 15th place. When asked about his impressions of young ASA Midwest tour star Ross Kenseth, he said "it won't be long until we see him racing down south."

www.asamidwesttour.com
Posted by Jason at 9:58 PM No comments: 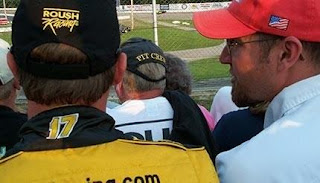 Here is your chance to watch some NASCAR stars up close and in action. Like Jason did back in 2007 (in picture above).

Tony Stewart and Matt Kenseth and Kelly Bires will race Ross Kenseth and all the stars in the ASA Midwest tour including Steve Carlson and Chris Wimmer on Tuesday night (June 29th) in Madison WI.
Listen LIVE at www.thebig1070.com

The ASA Midwest Sportsman tour race from Elko was rained out on Saturday night, an offical announcement on when (or if) it will be made up has not yet been made.

We will interview "Jon-Boy" on Speedtalk this Saturday (July 3rd) if he is available, if not, we will talk to track owner Donny Reuvers. 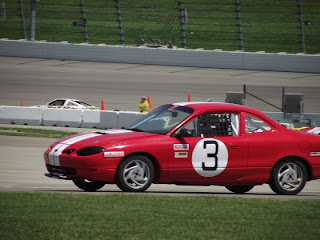 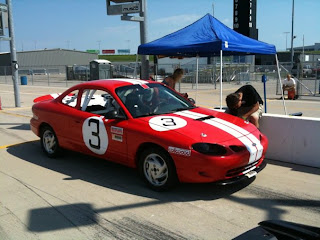 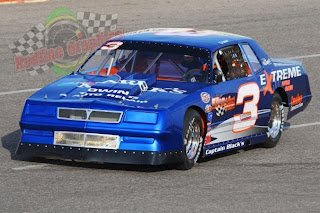 Minnestoa driver, ASA Midwest Sportsman point leader and two time winner Chris Marek will be on "Speedtalk on 1360" Saturday June 26th with Jason and Dean from 10-11am on KRWC radio and http://www.krwc1360.com/

A bad incident happend on Wednesday night (June 16th) at North Central Speedway in Brainerd. It appears a car went out of control and rolled out of the race track and into the pit area.

#46 Mod-4 driver Jim Eblen (former I-94 Raceway UCAR driver) was injured in a bad wreck along with two officals from North Central Speedway.

Here is the link to the Caringbridge web-site for Keith Nelson (a track worker) who was seriously injured in the accident.
http://www.caringbridge.org/visit/keithnelson


Track promoter Tim Boeder was also injured in the wreck.

Here is the link to the North Central Speedway web-site
http://www.racencs.net/V2010.1/


Our thoughts and prayers go out to everyone involved in this very unfortunate accident.
Posted by Jason at 8:28 PM No comments:

Interstate Truck driving school is opening in a new location in St Cloud. Just off of Hwy 23 West of Waite Park next to Anderson Trucking. http://www.interstatedriving.com/

David Wray automotive in Buffalo is offering some printable coupons on their web-site. http://www.davidwrayauto.com/

Now that the kids are out of school for the summer Raceway Park in Shakopee is going back to their normal start time on Sunday nights. Racing begins at 6pm. http://www.goracewaypark.com/

Brainerd International Raceway Performance driving school is offering 3 different "public performance driving events," in June. You can drive your own vechicle on the road course or rent the Ford Spec race car. The Dates are all on Mondays: June 14, 21 & 28. http://www.birperformance.com/

Please support all these SPEEDTALK Sponsors .. without them, we would not have a racing show on the radio!

You can see a classic battle between 17yr old Ross Kenseth and Chris Wimmer as they battle side-by-side for about 30 laps for the win at Elko Speedway.

The ASA Midwest truck series will also be featured in the telecast sponsored by Interstate Truck driving school.

The TV coverage will also include some interviews with Dean Reller in victory lane.


*** Heartland Thunder will begin on the Discovery Channel on MONDAY June 21st at 9pm. This show features dirt Modifieds racing at Lakeside Speedway in Missouri.

Get more info at www.jaybromotorsports.com
Posted by Jason at 9:04 PM No comments:

He has spent some time in the hospital and its been reported he has a broken vertebrae. Our best wishes go out to Jonathan and his whole #77 race team. Jonathan is a past "Rookie of the Year" winner in the ASA Midwest tour and also the winner of the 2007 ASA Midwest tour race at Elko. Get more information at http://www.asamidwesttour.com/


Jason and Dean will have Mid-Am announcer Matt Panure on "Speedtalk on 1360" Saturday June 19th from 10-11am on KRWC radio and http://www.krwc1360.com/ The Mid-AM guys will race at Road America road course in Wisconsin as part of the big NASCAR Nationwide series weekend. 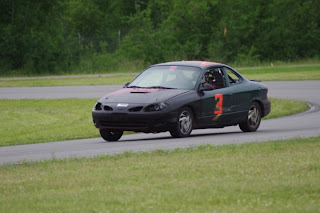 Michael Wray from Buffalo and his team finished a solid 5th place on Saturday and then 6th place (out of 29 teams) on Sunday at Brainerd International Raceway in the CHUMP Car endurance race.

The car ran mechanically well and the driving performance was good for this team of Rally Racers racing on a road coarse for the first time. On Sunday their average lap time was down to about 2:02 per lap. 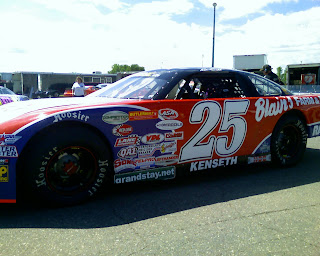 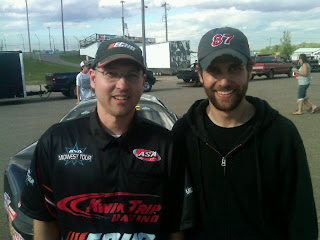 It was a great ASA Midwest tour race at Elko Speedway on Sunday (June 6th) after getting rained out the previous night.

17 yr old star Ross Kenseth (#25) drove a masterfull race leading about 90 laps of the 100 lap event at Elko. He started 4th and passed Tim Shendel to take the lead early in the race.

He then held off Jonathan Eilen (who later dropped out with electrical problems) and then Chris Wimmer (who started 9th) for about 30 laps side-by-side at the end of the race, Jacob Goede finished a close third after starting 14th. Donny Reuvers got 4th after starting 12th and Nathan Haseleu finished 5th after starting way back in 21st. Very clean racing, lots of passing and fun for the fans who showed up on the "rain date."

Dean and I had the opportunity to be the Public Address announcers at Elko for the day and called all the races. It was a blast for us, we also announced the inagural ASA Midwest tour race at Elko back in 2007.

We will have an interview with runner-up Chris Wimmer (in the picture with Jason) and will have much to say about this great event on "Speedtalk on 1360" this Saturday from 10-11am on KRWC radio and http://www.krwc1360.com/

Denny Hamlin won the Pocono race so, both Jason and Jordan picked that one right on the http://www.speedworksdiecast.com/ contest. Jordan leads with 20pts, Jason 15 and Dean only 5pts.
Posted by Jason at 2:31 PM No comments: 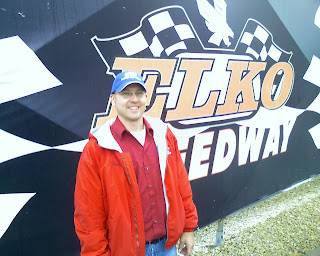 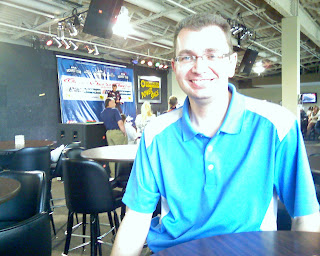 Due to the rain all day on Saturday, the ASA Midwest tour will race the "Elko 100" on Sunday (June 6th).

Classes competing will include: ASA Midwest tour Super Late Models, ASA Midwest trucks and Elko Thundercars. The Powerstocks and Super Hornets will not be racing on Sunday.

Jason and Dean will still web-cast the race beginning with qualifying at 12:30pm on Sunday (June 6th) on http://www.krwc1360.com/ 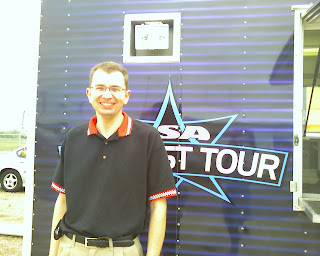 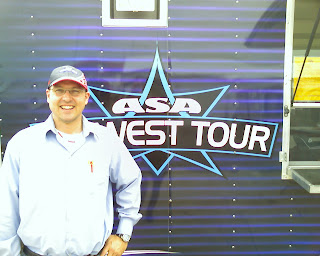 Jason and Dean from "Speedtalk on 1360" interviewed ASA Midwest tour president Tim Olson and 2009 ASA Midwest tour "rookie of the year" Jacob Goede Saturday from 10-11am on KRWC and http://www.krwc1360.com/
The race on Saturday night was called off due to the rain.

We will broadcast the post-poned ASA Midwest tour Elko 100 race now on SUNDAY (June 6th) beginning at 12:30pm on www.krwc1360.com

In 2009 we interviewed 17 different drivers in the pits including the top 3 finishers on the track after the race.

Here is an example a portion of the race broadcast from 2008 (Jacob Goede wins a heat race).

LISTEN TO THE RACE BY CLICKING ON THIS LINK BELOW