Trans Am returns to BIR 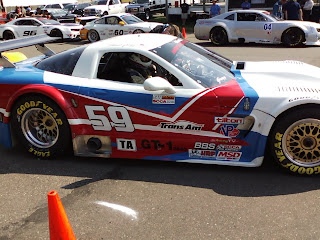 The Trans Am road racing series had its "glory days" during a twenty year history of racing at Brainerd International Raceway from 1969-1989.

The Donnybrooke 3 mile road course at BIR hosted some big purses and big name winners, like Parnelli Jones driving a Mustang for Bud Moore winning $3,300 in the inaugural event in 1969 and Mark Donahue in a AMC Javelin scoring $6,500 for his win in 1971.

Stock Cars and the NHRA stole the limelight at BIR for the next twenty years until the Trans Am series made its return three years ago.  They now race on the newly paved 2.5 mile 13 turn competition road course.  Only 7 cars raced in that 2010 event with Minnesota born driver Tony Ave driving a Corvette and taking home the top prize of $3,000.  Less money than the winner forty years ago. 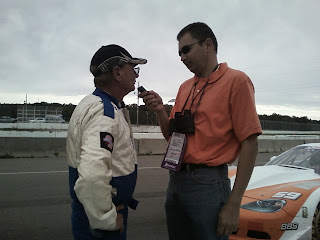 The series is building back to what it was with the help of Minnesota businessman, and old school racer Jim Derhaag (in photo above with Dean).  We remember him from his days racing the short tracks of the Midwest, but he also was an accomplished road racer with 151 Trans Am and one NASCAR Winston Cup start on his resume.

Jim's leadership has helped grow the 7 car field in 2010 to 17 cars in 2012.  The addition of the TA2 and TA3 American Muscle cars all racing together with the Trans Am vehicles has made the paddock a much busier place on race day.

This year the Trans Am series was paired with the NASCAR Nationwide series at Mid Ohio and Road America racing in front of huge crowds and turning some heads with these 850 horsepower machines. 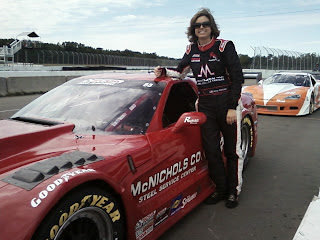 Amy Ruman (above photo) won for the third time in her Trans Am career at BIR last year, breaking the streak of four in a row by Tony Ave, she is currently fourth in the point standings.  Defending point champion Simon Gregg, son of Peter Gregg, is now third place in points behind veteran drivers Cliff Ebben from Appleton WI and Doug Peterson from Bonita Springs FL.


This event doesn't get the attention it did back in the "glory days," but it sure seems to be heading in the right direction.  23 cars are on the entry list for the race this weekend.

The driver autograph session is at 12:15pm on Sunday September 1st and the forty lap 100 mile race begins at 4pm.

Speed Talk on 1360 will have full coverage of the race and broadcast interviews from the winners on Saturday September 7th 10-11am on KRWC radio 1360 AM and www.krwc1360.com 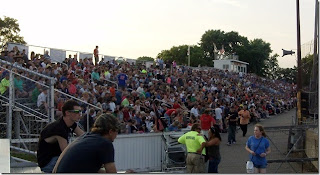 By Dean Reller
It’s common for a race track to have a promotion to get fans to fill the stands.  However, it’s not common for Drivers to become the promoters of such an event.  That’s exactly what’s happening at Raceway Park in Shakopee.  August 4th will be Pack the Stands Night and it’s rapidly becoming the talk of the town.  It all started when track announcer Kevin Busse suggested if sometime this year the all-time attendance record of approximately 3200 could be broken. That number dates back to June of 1971.  Driver Matt Stanley and members of his family made a few posts on facebook about it and then things began to take off from there. 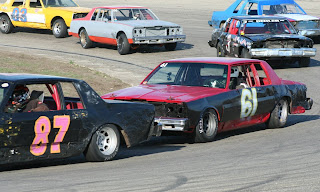 “Once I saw the posting, I felt like I would get the thing rolling,” said Mark Bronstad, a driver, about how he got involved.  Bronstad (#61) and Adam Radiske, another driver, talked about what they could do.  Radiske created a flyer for the event, which Raceway Park helped out by printing 1,000 copies and he and Bronstad began distributing them.  The use of social media helped make word of the event to grow even more.  “I created a facebook event, so it pops up on everybody’s calendars,” said Radiske.  “As a racing group a lot of our friends seem to be racing people.  So it keeps branching out, getting bigger and better.”  At last count there have been over 3000 people invited, nearly the amount needed to break the attendance record.  “It’s shared by many people on a daily basis,” said Radiske.  “It’s very cool to see the racers and fans just as much involved.”
Beside facebook, Bronstad has made postings on Craig’s List and City Pages hoping to get the word out about the Pack the Stands Night.  Despite the noise of the cars and the action on the track, drivers do notice when the stands are packed and making noise of their own on a race night.  “It’s huge,” said Bronstad with enthusiasm.  “That’s awesome to hear the crowd when you are in the car.”  Bronstad has arranged for the band Singers on Barstools to perform following the races.  This was by no means an easy task as the band regularly performs at McKracken’s on Sunday nights.  Not only did McKracken's allow the band to perform, they rented the Party Deck at the race track for the evening. 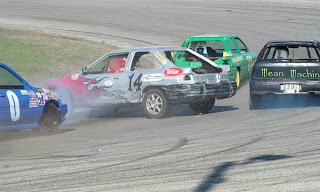 The buzz of getting fans to come out isn’t just limited to Pack the Stands on August 4th.  “I’m seeing everyone posting on facebook to come to the races, not just for this event, but to any event.  That’s nice to see,” said Bronstad.  What started out as an idea to break a record, has quickly turned into something that isn’t normally seen in the racing business, racers reaching out to the fans directly.  With so many entertainment options for people to choose from, the concept and support of events like Pack the Stands is a lesson for others to learn from.
A Dukes Jump has been added to the regular race program along with a on-track and through the pits bus ride for kids, racing begins at 6pm Sunday night.  Get more information at www.goracewaypark.com and listen for complete coverage of this event on Speed Talk on 1360 radio, Saturday morning 10-11am on KRWC radio and www.krwc1360.com