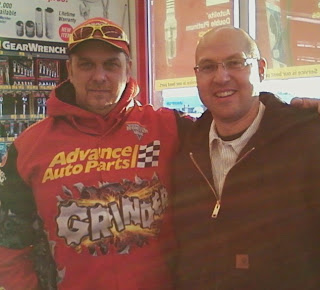 John Seasock (photo with Jason above) driving Grinder wins the racing portion of the Monter Jam event at the Metrodome on Saturday January 21st.  His truck was on display at Advance Auto Parts in Buffalo on Friday afternoon before the show. 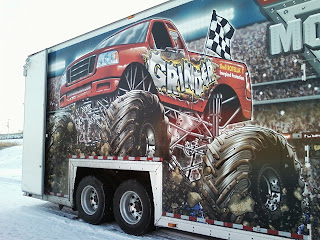 The Freestyle winner was Daren Migues driving Bounty Hunter, he scored a 23 edging out Iron Man and Teenage Mutant Ninja Turtle both with a score of 21.  The Bounty Hunter truck (photo below) did a show at Elko Speedway last summer during the Minnesota Millitary Charity event. 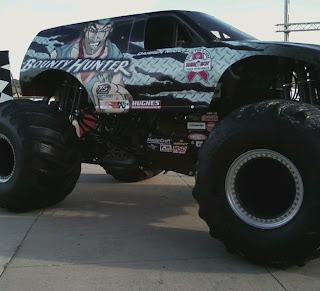 Chad Walen from Prior Lake (MN) is the 2011 Speedtalk MN asphalt driver of the year.

Chad had an incredible season racing at Raceway Park in Shakopee (MN), winning the Super Late Model Points Championship after finishing second the previous two years.  He was 8 points behind defending Champion Adam Royle with three weeks remaining in the season but ended up winning the title by 11 points.

Chad scored six wins on the season at Raceway Park but said the reason for success was limiting the bad nights, "We didn't have any mistakes this year, not one DNF."

Chad was a crew member when his uncle Mel was a Champion at Raceway Park back in 1993-1995.  Walen racing might be known as a throw-back team because they draw heavily on past experience.  "We went back to what we knew back then, and the same stuff works today," said Chad.  He went from crew member to behind the wheel in 2001 driving a Modified, then moved to the Late Model division in 2005 with his father as the car owner.

Raceway park is a tight 1/4 mile track with the fast groove on the bottom but you still will see plenty of two-wide racing.  "The only way you are going to win is to figure out that second groove, it's where you've got to pass people" said Walen.  The racing is not the only reason why Chad likes Raceway Park, "its a great family atmosphere" he said "the other competitors are really good, we get along and they help each other out."

Even though Walen racing spent most of their time racing in Shakopee, they also won a race in September at Elko (MN) Speedway and travelled to La Crosse (WI) to compete in the Oktoberfest races.  They also enjoyed travelling to Charlotte (NC) for the annual NASCAR Member track National awards banquet in December.

Chad mentioned that the plans are to come back and try win another championship at Raceway Park on Sundays and hit a few more shows on Saturday nights in 2012.