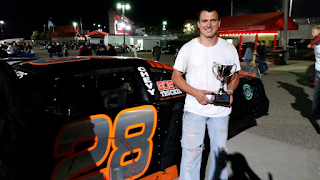 Things were going great for #28 Matt Goede in 2016, he just bought a house in Carver (MN) and at the age of 28 he was ascending to the peak of his racing career.  In auto racing he finished second place to his brother #72 Jacob Goede in the Premiere division at Elko Speedway for the second consecutive year.  In snowmobile racing he had just won his third Vintage World Championship in Eagle River (WI) and moved up to the Elite TLR Cup Tour Championship Ice Oval racing circuit.  The first week out he shocked many people by finishing second place to Cardell Potter in Fargo (ND), confidence was at an all-time high. Then the calendar turned to 2017 and Matt's life changed forever.

On January 8th while racing in Ironwood (MI) Matt's sled had mechanical problems causing him to slow dramatically coming out of turn number four, with the whole field bearing down on him.  His sled was hit, he slid off and then he was struck by another sled going 80+ mph.  He sustained catastrophic injuries including:  Shattered Kneecap, Broken Pelvis in three places, Dislocated Elbow, Three Broken Toes, Broken Foot and if that is not enough he had Compound Fractures (that means bones poking through the skin) in his Lower Leg, Upper Leg and Arm.

"I was awake the whole time," said Goede "I was aware of what was going on but I was in a lot of pain."  He was transferred to a hospital in Wausau (WI) and then the news started to get out to the racing community.  Prayers were sent over social media and Adam Brachle, the track chaplain at Elko Speedway, rushed to the hospital.  "It was great to see Adam, nice to see a familiar face, I'm glad he was there for my dad and everybody," said Goede.

Shortly thereafter a GoFundMe page was set up to help Matt with his medical expenses, the Goal was to raise $15,000.  The response on Facebook was immediate and impressive, that page has been shared 3,100 times and 282 people donated a total of $32,885... so far.  "I can't thank everyone enough for the support and donations, when things go bad, I guess that is when you find out who your friends really are" said Goede. "I'm not really an outgoing person, so for all those people to show their support is really cool."

Matt's father John Goede also raised $10,000 by donating the sled that Jacob rode to a Vintage World Championship in 2006 and 2011 to a Charity auction.  That $10,000 was donated to Blaine Stephenson, who was also injured in the Ironwood race, and Gavin Bihner, who was injured in a race on New Years Eve. 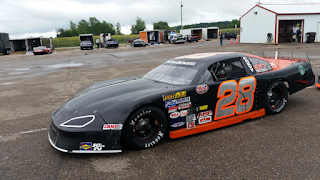 Matt is back home and on his way to recovery now, but there is a long way to go.  He is still in a wheelchair and can't put any weight on his right side.  "Pretty much all I can do is sit in my wheelchair and watch TV all day long," said Matt "This injury sucks but I'm glad to be here, it could've been much worse."  Matt is hoping to be able to walk by May so he can get back to the racetrack, "I want to be at the track every week, my brother (Jacob) plans on racing Elko Speedway and I'm looking forward to watching" said Goede.

Matt is not giving up on racing himself on asphalt or ice, but that is quite a ways off, right now he is just thankful to be alive and looking forward to flipping the calendar to 2018.
Posted by Jason at 8:17 PM No comments: