Circle the date Saturday June 3rd 2017 on your racing calendar because that is the return of the ARCA series to Elko (MN) Speedway.  The ARCA series presented by Menards not only is one of the very few chances for us to see live pit-stops up here in the North, it also provides the unique opportunity to meet and greet the future stars of our favorite sport.

As an example, think back to the very first ARCA race ever held in Minnesota, it was at Elko Speedway six years ago, it was a beautiful day on June 2nd in 2012.   28 cars started the Akona 200 with Alex Bowman on the pole.  Alex Bowman currently is employed by Hendrick Motorsports and he drove the #88 car for Dale Jr in the opening Clash at Daytona International Speedway last February.  He is so highly thought of that Mr Hendrick offered him a contract even though he has no ride for him at the moment, he might be driving the #88 car next year in the Cup series.

Matt Lofton led the race for a few laps until Brennan Poole took the lead on lap 12, he had the quickest car all night long.  Poole currently races full time in the NASCAR Xfinity series in the #48 car for Chip Ganassi.

Some cars pitted for tires on lap 66, including Chris Buescher who is now racing in the Monster Energy NASCAR Cup Series for JT Daugherty after winning the NASCAR Xfinity Championship in 2015 for Roush/Fenway racing.

Local driver Joey Miller from Lakeville (MN) brought out the caution on lap 90 providing the opportunity for Brennan Poole to pit for tires, Poole returned to the track in 8th position.

Steve Arpin, who grew up just a few miles north of Minnesota in Fort Francis, Ontario, Canada brought out the next caution on lap 117.  Arpin is now racing for Chip Ganassi as a factory Global Rallycross driver.  Poole had worked his way up to fourth when the caution flag flew.

Poole (photo below) then used the high side to his advantage and took a lead he would never relinquish on lap 133, he won by 1.205 seconds over Matt Lofton with Chris Buescher finishing 3rd and Frank Kimmel coming across the finish line 4th. Tom Hessert was 5th and Joey Miller fought back for a strong 6th place finish. 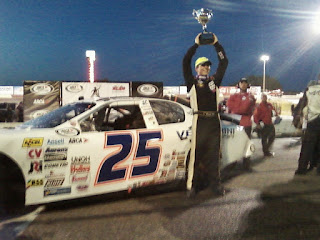 Two other notable drivers were not even a factor in the race.  Erik Jones, a 7 time winner in the Xfinity series, who currently drives for Furniture Row in the Monster Energy NASCAR Cup series finished 8th and two-time Daytona Xfinity series winner Ryan Reed, who is now driving for Roush/Fenway in the #16 car, finished 13th.

The race took just over one hour to complete in 2012, so an extra 50 laps were added in 2013.  It was a very memorable event when NASCAR Cup Legend Ken Schrader won the pole and ARCA Legend Frank Kimmel tied Iggy Katona for the most career ARCA wins with 78.  Grant Enfinger (below) spun early but came back through the field and won the ARCA race at Elko Speedway in 2014.  Here is our Speed Talk on 1360 audio recap of the 2014 race https://soundcloud.com/speedtalkon1360/arca-elko-2014 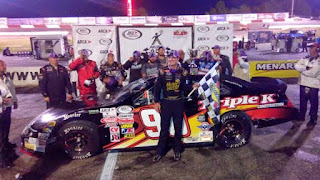 Thinking back 6 years ago to the first race in 2012, If only we had known just how many of those ARCA drivers would go on to become stars in NASCAR things would've been different.  We all easily could've gotten autographs from each and every driver in the race and filled up our camera's with the photographic proof that I met THAT GUY who now races every weekend on TV!

Many of us didn't take advantage of that opportunity a few years ago but, thankfully we now have a second chance because after a two year hiatus, the ARCA series presented by Menards will be returning to Elko Speedway for the Shore Lunch 250 lap event on Saturday night June 3rd and joined by the Great North Legends cars.

Look for rising stars like #52 Austin Theriault from Fort Kent Maine who has recently raced in both the Truck series and Xfinity series, he drives for Ken Schrader and is the point leader.  Dalton Sargeant #77 is a 19 yr old from Boca Raton FL who is turning heads, he is second in points.  Gus Dean #32 from Bluffton Georgia and Justin Fontaine #33 from Fletcher North Carolina are driving for Win-Tron racing owned by former ASA Champion Kevin Cywinski who lived for many years in Minnesota.  Joe Gibbs racing has an entry in the field as well, #18 is Riley Herbst from Las Vegas Nevada.

Natalie Decker (below) from Elk River WI, who has spent a lot of time at Elko Speedway the last couple years, will be racing #25 for Venturini Motorsports after a lead-lap finish in her ARCA debut at Toledo. 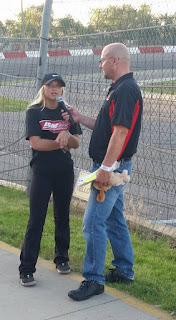 Northfield (MN) racer Cole Anderson is also entered in the race, he will be driving the #78 car for Mason Mitchell Motorsports.  Cole has won some big Super Late Model races in his short career but a win in this race would really get him some National attention.

The race itself is sure to be memorable but the pre-race autograph session and selfie line with all the ARCA drivers might provide that lasting image that you will cherish in a few years.  When you live way up here in the North Country, opportunities like this one don't come along every day.  So don't miss it.  Spectator Gates open at 1pm, ARCA Qualifying at 5pm, the Eternity Homes Great North Legends feature is at 5:30pm, the on-track autograph session is from 6:15-7:15pm with ARCA racing at 8pm.

Get discounted Tickets at Regional Minnesota Menards Stores and get more information at ElkoSpeedway.com or Aracracing.com

***Franklin (VA) driver Willie Mullins has a CW Metals from Monticello (MN) as a sponsor for this race and is putting a big effort into having a good run at ELKO.  Here is the interview Jason and Dean did with Willie https://soundcloud.com/dean-reller/speed-talk-5-6-17-willie-mullins-arca-driver

***Kevin Cywinski is the owner of ARCA team Win-Tron Racing.  Here is an interview with Kevin talking about his storied racing career and the upcoming ELKO race.  https://soundcloud.com/dean-reller/speed-talk-5-13-17-kevin-cywinski


****Cole Anderson from Northfield MN will be in the ARCA race at ELKO.  He is driving the #78 car for Mason Mitchell Motorsports.  Here is the interview we did with Cole talking about this great opportunity.  https://soundcloud.com/dean-reller/speed-talk-5-27-17-cole-anderson-interview