The Champions banquet wrapped up the 49th season of racing at Elko Speedway.  It was interesting looking at some of the 2014 season ending facts and numbers.  We saw nine different winners in the Super Late Model division, Jacob Goede won the point title, the driver of the year and seven races, but Paul Paine had an incredible year finishing second and was very consistent but had no wins.  1976 Elko Point Champion Mark Lamoreaux won a race early in the season and Kyle Hansen finished 9th in points and received the Rookie of the Year award. 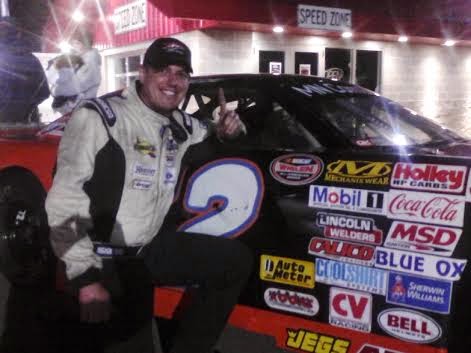 Jacob Goede (photo above) was very emotional in his victory speech and had to pause to gather his emotions at one point.  He said "the decision to come back home to Elko was easy, I learned that racing is not as much fun if you're not doing it with people that you love."  He mentioned to me many times during the year it was really nice to race against his brother and with his young and expanding family nearby.
Ten different drivers won races in the Big 8 division, proving that the cars were evenly matched and nearly anyone could win on a given night.  Chris Marek won the point title and five races, three in a row at the beginning of the season.  Jon Lemke closed the gap in the points late in the year finishing second, Michael Beamish was much improved and finished the season third in points in addition to winning the Oktoberfest race.  Rookie Cole Anderson turned some heads with his two wins and four "fast times" in qualifying, more than any other driver, he also received the Rookie of the Year award.
Conrad Jorgenson won the Thunder Car title his fourth Championship at Elko Speedway.  He has now won in the Thunder Cars in 1995, 2003 and 2014, he also won the Super Truck Championship in 1997.  Only 5 different drivers won races this year with Brent Kane getting 8 victories but finishing fourth in points because he missed a race night mid-season to be in a family wedding.  Jack Purcell finished 10th in points and won the Rookie of the Year award. 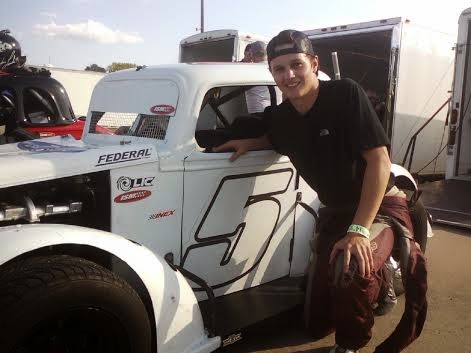 The Great North Legends title was won by Derek Lemke (photo above), he scored three wins during the season in the Legends and one in the Super Late Models.  Brady Fox-Rhode finished second in points and won the "Most Improved Driver" award, he moved up from 7th in points last year to 2nd in 2014.  He also scored a win at Elko Speedway, Hawkeye Downs and the Dells in addition to winning the "race of Champions" in the Asphalt National Championships at the Bull Ring at Las Vegas Motor Speedway.  Eight different drivers scored a win this year, Tim Brockhouse lead the way with 4 wins racing part-time and Jared Duda won Rookie of the Year.
The Power Stock division was arguably the most entertaining division all year long at Elko Speedway.  Nick Oxborough won the Championship in his rookie season at the track, he scored three important wins, very crucial because they were the determining factor when he tied with Grant Brown for the points Championship.  Brown finished runner-up in the Championship but he won the UNOH Youth Achievement Award, what he accomplished at the age of 14 was astounding.  Ten different drivers won races in the Power Stock division and the 20+ car count every race night was very encouraging for the future of that division.
Brian Adams won the Mini Stock title with six wins, Michael Wachs Jr and Brandon Plekkenpol tied for second with Wachs getting the tie breaker with his two wins.  Eight different drivers won in the Mini Stock division and Collin Neisus won Rookie of the Year.
Brody Wulf won in the Bandoleros, he had four wins and Owin Giles had five wins and finished second in points.  This division is very important to Elko Speedway to keep talented young drivers here, a good transition from the "little Elko" 1/4 midget track to racing in front of the big crowds at the big track.  Power Stock driver Grant Brown won the Bandolero Championship in 2012 and Great North Legend driver Jared Duda won in 2013, they are both moving up the ranks and continuing their racing careers at Elko Speedway. 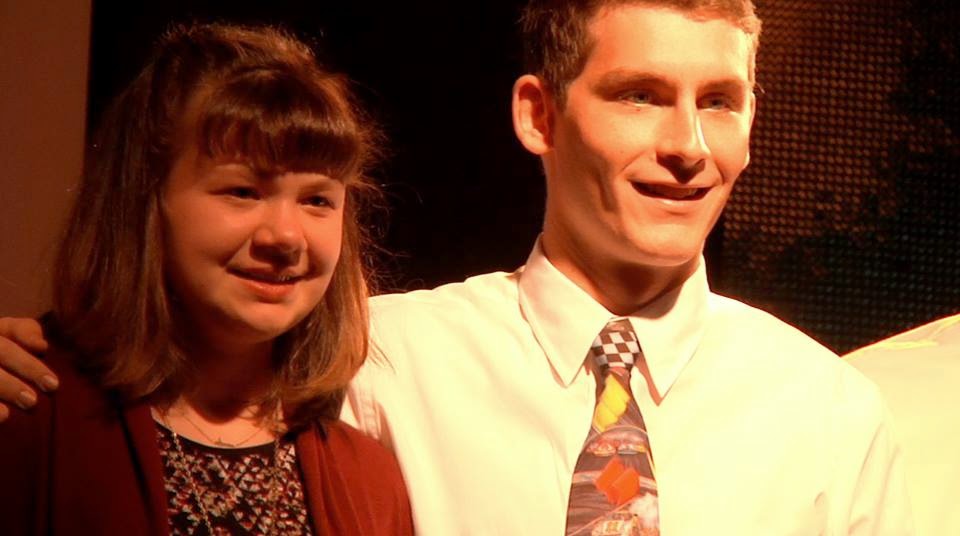 The Nick Beaver race team won the Elko Speedway Goodwill award for their efforts in helping Rylie (photo above), a young autistic girl become their biggest fan.  They made her part of the team and gave her the trophy after a big win.  Their compassion touched many people in the audience and they got a standing ovation at the conclusion of the program when Rylie and the Beaver team came up to accept the award.
Now that 2014 is wrapped up time to recharge our batteries and look ahead to next year, the 50th season of racing at Elko Speedway.
Posted by Jason at 10:34 PM No comments: