Speedtalk on 1360 wants to thank race fans for another great year celebrating our favorite sport.  2011 marked the 20th year of covering Motorsports for both Jason Searcy and Dean Reller, the last three years on KRWC radio in Buffalo.

We are currently planning and looking for sponsors for our 2012 season.  If you have a business that wants to support Motorsports and target a loyal audience for as little as $50 per week, please contact us!  speedtalkon1360@gmail.com 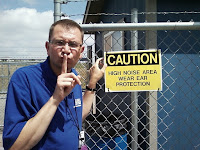 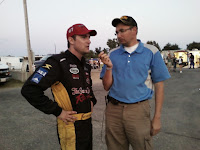 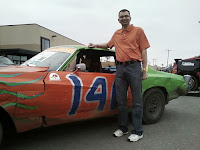 
Move over Grave Digger and Maximum Destruction, a couple young kids showed they are more than capable of knocking off the elder statesmen of Monster Jam at the Metrodome. 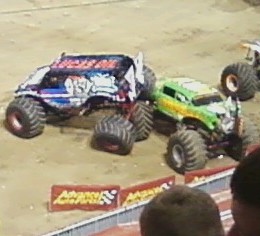 First time winner 21 yr old Morgan Kane driving Monster Magic shocked the Metrodome crowd with a win in the racing portion of the show.  He beat El Madador and then took advantage of a mistake by Lindsey Weenk driving Lucas Oil Crusader, who bicycled up onto Avenger in the Semi-Finals (photo above).  Then a big upset in the finals as he beat Ryan Anderson in Son UVA Digger by inches.  Morgan Kane and Ryan Anderson have been friends since childhood and now seem to be ready to take their game to the next level.

*RACE DAY UPDATES:
Jeff Choquette has lead most of the race, Johanna Long crashes and hits wall to bring out a caution at lap 100 of 300.  Erik Darnell is out with a bad tranny, David Ragan also in the pits with mechanical problems.  Bubba Pollard and Chase Elliott fighting for the lead at lap 123 as Dennis Prunty brings out the caution.  Steve Wallace is out of the race at lap 130.

The leaders Pollard, Choquette, Grill & Elliott all have contact in turn 4 as they were going for the lead on lap 145.

Lap 200 Casey Smith is the leader, Ross Kenseth is in 13th place.  With 50 laps to go, Chase Elliott is the leader followed by Van Dorn, Smith, Hamner and Cassill. 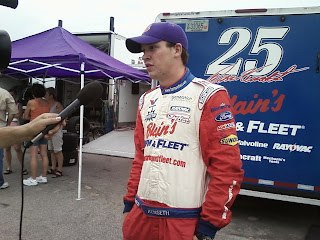