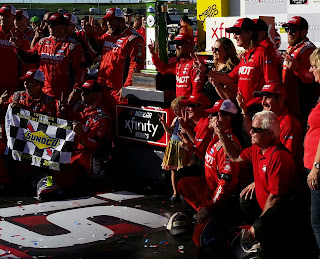 Justin Allgaier #7 won the 8th annual Iowa 250 presented by Enogen NASCAR Xfinity series race at Iowa Speedway.  The entire race was really a dog fight from beginning to end, the lead was swapped numerous times but Allgaier led 182 of the 250 lap event.  "It was a fun day and Cole (Custer) and the other guys all raced me clean, we performed well today," said Allgaier after the race.  Christopher Bell #20 had a fast car all race long, he took the lead two times, but was immediately passed back by Allgaier both times. 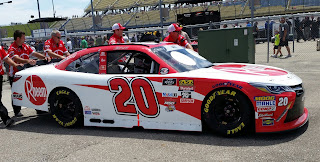 Bell finished second place, he started the race at the back of the field after failing tech and not attempting a lap in qualifying. Daniel Hemric #21 finished third and led two laps, #00 Cole Custer had a strong car and led two laps as well he finished fourth, #19 Brandon Jones finished a strong fifth place finish.  Here is our post-race interview Brandon Jones (photo below with Jason Searcy) 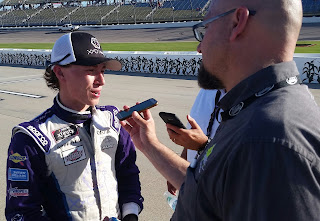 "The hot and slick track conditions made for great racing, plus the talent in this series is incredible" said Iowa 250 winner Justin Allgaier.  Former Iowa Speedway winner Elliott Sadler #1 Brushed the wall in the first segment and fell back he eventually finished 28th place.

Riley Herbst driving #18 for Joe Gibbs made his Xfinity series debut and finished 6th, here is our interview post-race Riley Herbst (photo below) 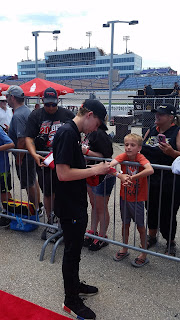 Ty Majeski #60 had a career best 7th place finish in the #60, here is our interview with him post-race Ty Majeski.  Majeski said he was happy to finally get a good run with his Roush team, he also said it was nice to have his Late Model guys in attendance watching him race. 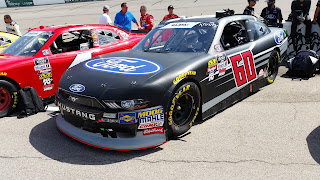 Kaz Grala finished 10th in the 61 car, here is our exclusive interview with him Kaz Grala in what could be his final race in the Xfinity series because of a lack of sponsorship.

Pole sitter Austin Cindric #22 finished 11th after racing up front for much of the race.  Cindric earned  his first career Xfinity series pole.  Here is our interview with him Austin Cindric 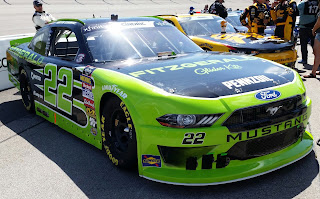 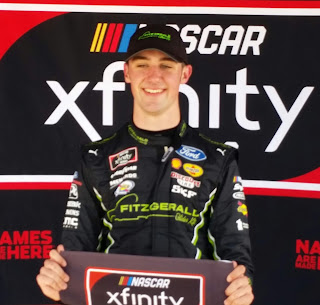 Justin Haley was making his Xfinity Series debut and he finished 12th, here is our exclusive interview with him from pit road.  Justin Haley

The weather was blistering hot and the race lasted 2 hours 8 minutes.

Dean Reller, Jason Searcy and Shane Carlson will have a full recap of the Iowa Speedway NASCAR weekend including all the interviews on Speed Talk on 1360 Radio Click this Link for the Podcast
Recap of Opening Weekend 2018 at Iowa Speedway 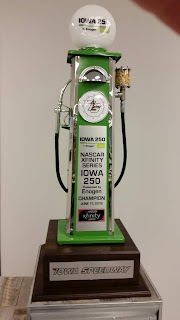