The ARCA Midwest tour Super Late Models capped off an incredible Thunderstruck 93 weekend of racing at Elko Speedway.  This fifth annual event is a memorial to former racer Dan Ryan and raises funds to help fight ALS.  With Kent Hrbek in attendance the 50/50 raffle raised over $800 on Friday night and over $1800 on Saturday night, they also had numerous other fundraisers and over $20,000 was raised for charity on the weekend. 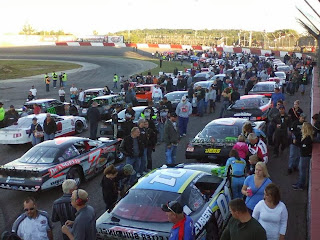 Saturday night began with an on-track driver autograph session with all the racers and their cars in attendance at Elko Speedway.  It was an awesome sight with over 150 cars participating. 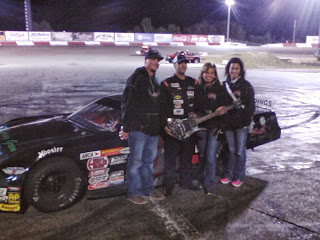 Andrew Morrissey (photo above) from DeForest (WI) swapped the lead with veteran NASCAR star Rich Bickle before finally taking the top spot with 27 laps to go in the 125 lap main event.  Morrissey held on for the win by .823 seconds over a hard charging Chris Wimmer who came from 8th place on lap 93 to second place at the finish line.  Bickle dropped back to third in his final Elko Speedway race before retirement. 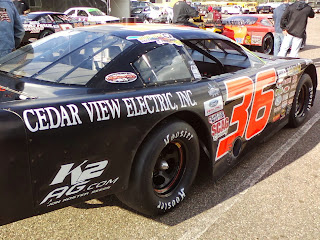 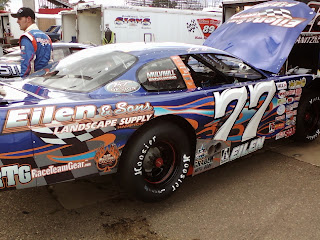 Nick Murgic from Rosemount (MN) took the lead early in the race that saw 79 consecutive green flag laps to begin, Murgic then faded back to 23rd due to mechanical problems.  Defending ARCA Midwest tour champion #77 Jonathan Eilen from Hampton (MN) started 7th and raced his way into the top 3 before backing into the wall, he was forced to pit numerous times and then fought his way back to finish 12th. 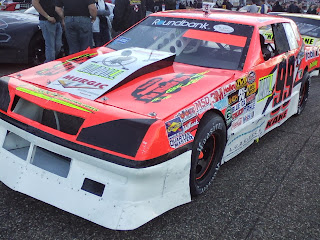 Chris Marek from Lakeville (MN) capped off his 2013 Championship season at Elko Speedway the right way by winning the wild 58 lap BIG 8 main event on Saturday night.  30 cars from all over the Midwest entered the race and 24 started the feature event. 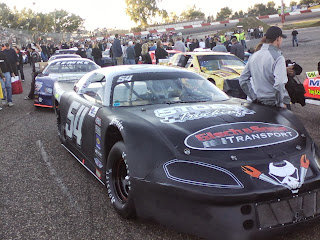 Marek did Minnesota proud by leading most of the race and taking home the hardware.  # 54 Dylan Moore had the lead early but took a wild ride and rolled his car down the front stretch, he landed on his roof and ended his night early.  Jon Lemke also sustained damage in the incident, he had to pit and eventually finished 6th.  The BIG 8 touring cars finished 2nd through 5th with point leader Casey Johnson from Edgerton (WI) scoring the runner up position 1.714 seconds behind Marek at the finish line.

Ten Mid American Stock Cars raced a 30 lap feature with Dan Gilster from LaCrosse (WI) winning his first ever feature with this series.  Gilster won by an impressive 4.952 seconds but it was very close for the runner up position, point leader Brad Keith edged Kyle Nowak by a bumper to finish second Mark Pluer was in the mix for that position until last lap mechanical problems dropped him back to 7th.

The Great North Legends had two feature races over the Thunderstruck 93 weekend.  On Friday night Dirk Henry from Sauk Centre (MN) won his 4th feature of the year, he beat out Tim Brockhouse for the win.  On Saturday night 24 cars took to the track for the 20 lap feature and Michael Ostdiek from Lakeville (MN) came home with the win, the top 4 crossed the finish line just .473 seconds apart.  Derek Lemke finished second, Brockhouse third and James Wenzel fourth.  Michael Ostdiek now has a 43 point lead over Derek Lemke going into the final race night at Elko Speedway.

On Saturday it was Brandon Plekkenpol from Shakopee (MN) winning the feature, Jack Purcell got second and Ridge Oien third.  Jack Purcell from Bloomington (MN) was the overall Thunderstruck 93 weekend top point getter and was awarded a huge trophy and free season pass into the pits for all of 2014.  Purcell now leads John Vandenheuvel by 24 points in the standings.

Dean Reller from Speed Talk on 1360 Radio interviewed the Top 3 ARCA Midwest Tour finishers and the Midwest Super Truck winner, they will be broadcast on Saturday morning 10-11am on KRWC 1360 radio and www.krwc1360.com.
Posted by Jason at 9:47 PM No comments: 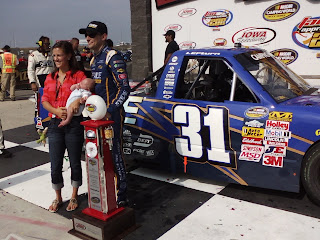 James Buescher won the Fan Appreciation 200 Camping World Truck series race at Iowa Speedway.  He had fresher tires than many of the lead lap trucks and that helped him motor past Ross Chastain and hold on during the second Green-White-Checkered attempt to finish the race.  Chastain (#19 below) lead 116 of the 212 laps and was the strongest truck most of the day but his truck was not as good on the short runs and Buescher took advantage. 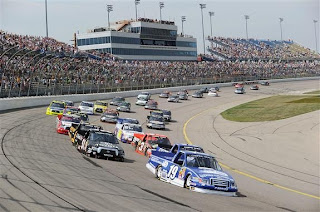 Chastain's teammate Ryan Blaney also spent time up front near the end of regulation but he lost the lead during a caution "I thought we were 7-10 laps to the good on fuel," said Blaney "we just got an air bubble in the line and the truck shut off and it slowed us up just that little bit to make them (NASCAR) put us back there."  Blaney was penalized for not keeping up with the pace car, he ended up finishing 10th. 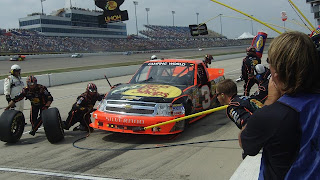 Ty Dillon (#3 above) lead 46 laps during the race, his team got off pit sequence with the leaders and went one lap down mid-race, the team replaced the battery on a pit stop and Dillon had to drive without any brake fans.  Even with all that adversity the team fought back to finish 3rd. 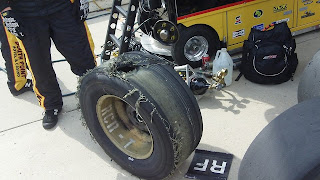 Brendan Gaughan had an eventful day, he had a tire going down (photo above) while in 3rd place on lap 116.  It actually blew during his pit stop, caught on video by Dean Reller (link below).  Gaughan's problems did not stop there, he pitted numerous time to fix damage and eventually crashed with Joey Coulter in turn two ending both their days a little early.  https://www.youtube.com/watch?v=kOcQYNS58Lg&feature=c4-overview&list=UU0-HpFKbreUCFudu07n6_hw

Karma from last weeks race in Canada might have caught up with Chase Elliott who dropped out of the race early due to a mechanical problem and resulting crash on lap 35, he finished 31st.

Matt Crafton finished 8th and continued his incredible streak of "top 10" finishes.  He now leads in the point standings by 37 over James Buescher and Ty Dillon is in third 58 points out of the lead.  Jeb Burton finished 8th place in the Iowa race and is fourth in points, 66 out of the top spot. 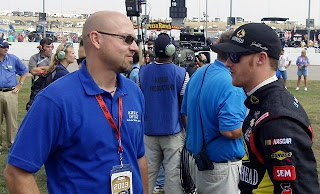 Listen for interviews with: Ty Dillon, Ross Chastain, Matt Crafton, Jeb Burton (photo above) and Jennifer Jo Cobb on Speed Talk on 1360 radio Saturday 10-11am on 1360 AM KRWC or on the "tune-in" app on your phone or live streamed on www.krwc1360.com

Peterson wins Trans Am at BIR 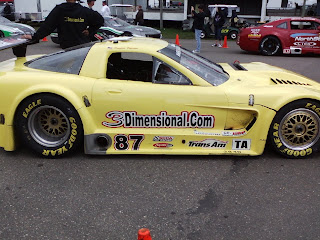 Doug Peterson (photo above) from Bonita Springs (FL) lead the entire 40 laps to win on the newly paved 1.5 mile road course at Brainerd International Raceway, its his fifth win of the season in the Trans Am series.

Peterson won qualifying and set a new track record in the process with a lap of 126.851, over 103 mph average speed.    22 cars took the green flag in the race, the largest field of cars since Trans Am returned to BIR in 2010.  Peterson held the lead in the race and never looked back.

"We've had a spectacular weekend," said Peterson "the new track is amazing, much faster than last year."  It was not an easy run for the win, Peterson had to wait out a long 11 lap double caution period and then have an 8 lap shootout to the checkered flag.  He was pressured by four time BIR winner Tony Ave, 2012 winner Amy Ruman and defending champion Simon Gregg, the top four drivers were just 1.356 seconds apart at the finish line. 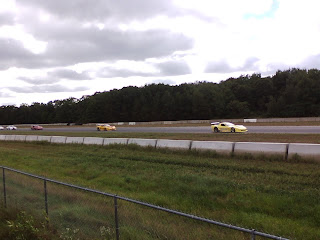 Amy Ruman (bottom photo) dropped back to 6th position on the first lap, "I spun in turn four, I got in those pebbles just a little bit," said Ruman.  She then had a furious drive through the field to catch the leaders, "we needed about three more laps," she said "I was trying to make some moves at the end but Tony (Ave) drives a really wide car."  Ruman posted the fastest lap of the race at 1:28.974 averaging 101.153 mph. 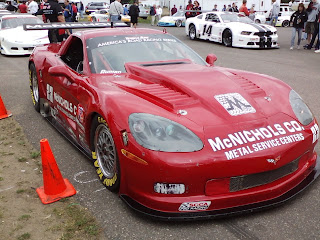 BIR track owner Jed Copham (on left below) raced the Derhaag Motorsports #40 car and finished 5th.  "That is a hell of a car, a wild ride," said Copham "I stayed on the lead lap and finished the race, those were my goals so I am happy." 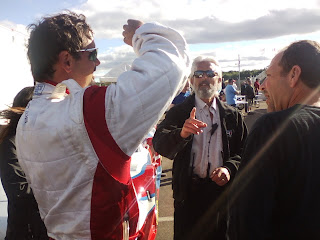 Listen for full interviews with Doug Peterson, Amy Ruman and Jed Copham on Speed Talk on 1360 radio, Here is the audio from KRWC https://soundcloud.com/speedtalkon1360/bir-trans-am-recap-2013
Posted by Jason at 1:58 PM No comments: