The 2013 race season at Elko Speedway came to an end with the Champions banquet on Saturday night October 12th. 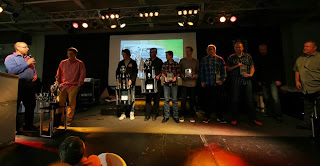 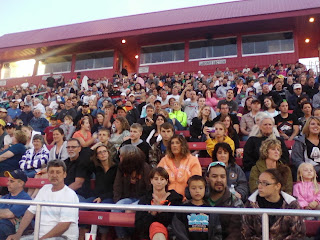 The preliminary 2014 Elko Speedway race schedule has been released with opening night set for May 17th, 2014.  Mini Stocks have been added to the weekly race program to join the Super Late Models, Big 8, Thunder Car, Power Stock, Great North Legends and Bandolero divisions.  Seven "Eve of Destruction" events are planned for next summer.  Get more information by calling (952) 461-7223 or go to www.elkospeedway.com
Posted by Jason at 6:55 AM No comments: 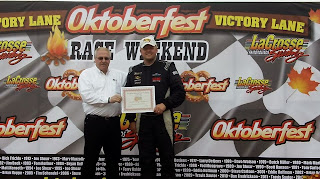 Dan Fredrickson from Lakeville (MN) won his second ARCA Midwest tour Championship with a runner up finish in La Crosse (WI) Sunday afternoon.  Fredrickson won two races in 2013 at Wisconsin Dells and State Park Speedway.  He only finished out of the "top 10" once during the entire 12 race schedule.  Fredrickson won the title by 50 points over Chris Wimmer, Nathan Haseleu finished 3d and Carver (MN) native Jacob Goede got 4th.  The 2012 Champion Jonathan Eilen from Hampton (MN) won one race and finished 6th in the standings.


The 44th annual Oktoberfest race weekend was highlighted by a wild finish in the ARCA Midwest tour finale.  Travis Sauter was spun by his uncle Johnny Sauter during caution just after a white flag on-track incident between the two that sent Johnny spinning into the infield.  Both racers were credited with a DNF in the race.  Here is video ABOVE .. Johnny Sauter is in the white and blue #5. 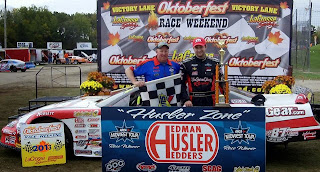 Nathan Haseleu won the race and putting his name in the record books.  Fredrickson finished 2nd and Wimmer third.   Here is an audio recap of the race with Speed Talk on 1360 co-host Dean Reller interviewing the top 3 finishers, Click on this LINK BELOW
http://www.youtube.com/watch?v=oQWOA_5MibE 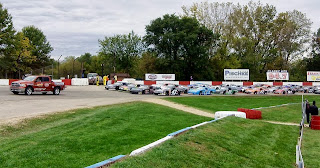 Minnesota racers were also well represented in the other divisions of racing at the famed La Crosse Fairgrounds Speedway in West Salem WI.  Chris Marek from Lakeville (MN) won both the BIG 8 main event and was the overall winner in the the JMcK race as well named after famed promoter John McKarns.

Chad Walen from Prior Lake (MN) went home with a trophy as well winning the Super Late Model futures race on Thursday night.

The Final Final at Raceway Park

Not An Ordinary Night At The Races, The Final Final At Raceway Park
By Dean Reller
When the news came out earlier in the year it was a date that many people circled on the calendar, September 1st, the last day of racing at Raceway Park.  As the season went on, everyone talked about the end and then, suddenly the calendar turned over and it was September 1st, the Final Final was here.
The day started with a different vibe as I Iogged onto facebook.  Nearly everyone had something to say about the race and the racetrack.  Some posts were insightful, others emotional, but all set the stage that this would be no ordinary night at the races.
As I pulled into the parking lot there were many people with the same plan as me, Get There Early!  Before I even got out of my car, a man exited the SUV parked next to me and a guy gets out dressed in white pants, a nice shirt and tie, then he grabbed a sports coat and headed for the pit gate.  Once again it was evident that this wasn’t a normal night at the races.  Since it was Championship Night, there was a bit of tension in the air, but mostly it was a bit of friendly camaraderie as everyone wanted to put on a great race, one more time. 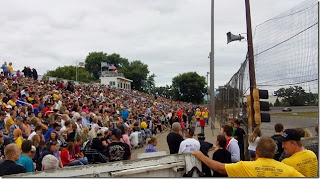 The Driver’s Meeting was a bit different than normal.  Track owner John Hellendrung thanked everyone and explained the situation with the track.  Also present was Tom Ryan owner of Elko Speedway, who openly invited all the drivers to come try racing at Elko Speedway and to consider racing there next season.  During the next few hours, two Twin Cities television stations would report on the final night of racing.  Hence, explaining why someone was wearing white pants and a sports coat to the races.  The racing program went relatively smooth.  Dave Nogle used the last ever Figure 8 race to win his first feature of the season, making his final race at Raceway Park very memorable at a track that’s been very special for him.  “I’ve raced here since 2000 and it’s the people, it’s a whole different clan.  They’re really cool, they help each other out too,” said Nogle about the close knit group of racers in the pits.
Jeremy Wolff would add his name in the record books as he was the last driver to roll his car on the final lap of the intense Hobby Stock Feature.  Brent Kane would take the Hobby Stock Feature win, but it wasn’t enough to keep Conrad Jorgenson from winning the Championship.  “It’s pretty cool to win the last Championship ever,” said a very happy Jorgenson following the race.  “In 1996 I won my first championship here and it’s pretty cool to end it up winning one again.”  The large crowd that packed the grandstands made their presence known and drivers like Jorgenson took note.  “It’s always fun to run in front of a huge crowd, but tonight it was incredible,” Jorgenson remarked.  At 10:19 PM , the Checkered Flag waved for the final time as Benny VanCleve won the Great North Legends Feature to become the last ever winner at Raceway Park, ending 57 years of racing at the historic track.

After the race, no one was in a big hurry to leave.  Many drivers and fans alike walked around the track following the races taking pictures and reliving memories one more time.  “I’ve been here a long time as a lot of us have been and it’s a big family, so it kind of feels like we lost someone in the family,” remarked Figure 8 driver Kari Miller as she walked around the facility one more time following the races.  “I’m just trying to celebrate tonight, instead of being sad of the end of something; I’m trying to celebrate the memories that we have here.” 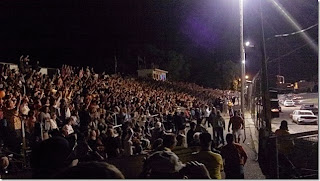 Many drivers, crews and fans took their time leaving as some were saying goodbye to not only the track, but to their racing career as well.  Slowly as the night and early morning progressed, the crowd finally dwindled and a new sound emerged over that tiny little quarter mile track, the sound of silence.  Something that will now be heard on Sunday nights in the summer.

Here is an audio recap of the night including interviews from:  Brent Kane, Conrad Jorgenson, Dave Nogle, Kari Miller and Benny Van Cleve as heard on KRWC radio.

https://soundcloud.com/speedtalkon1360/raceway-final-race-recap
Posted by Jason at 8:23 PM No comments: