The ASA Midwest tour is awarding the win to Johnny Sauter even though he did not fully pass tech inspection, he will be fined and points taken away.   Here is the Tech statement from ASA  http://asamidwesttour.com/article/101811/oktoberfest-post-race-findings-asamt-oktoberfest-100 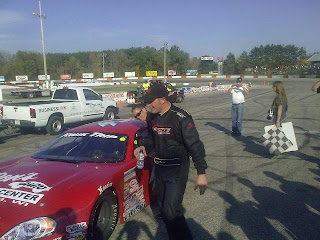 The final 85 laps went quick as Johnny and his nephew Travis Sauter carved their way through this talented 30 car field, lapping everyone except the top five cars, they finished about a half-lap ahead of third place finisher Chris Weinkauf. 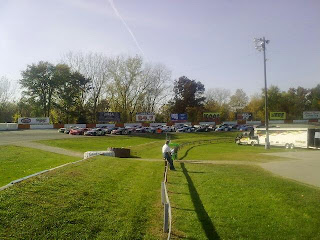 NASCAR does not hold a top series event in Minnesota, but with General Mills, 3M, Best Buy and Great Clips all sponsoring top level drivers in the sport, they come to race in our great state anyway. 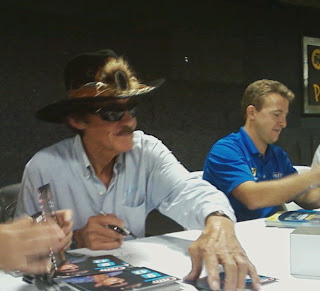 The King Richard Petty (photo above) was in attendace and signed autographs he had the longest line by far, and he signed for everybody with his trademark smile the entire time.  When someone asked if he was racing tonight, he said "I brought two drivers with me for that." 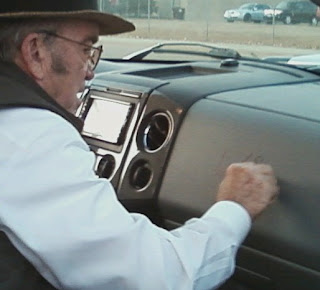 NASCAR owner Jack Roush (photo above) was asked by a fan to autograph their custom Roush Ford F-150 pickup, the crowd laughed and Jack said he would.  Well, he DID, he walked right out to the parking lot and signed his name on the dash of the passenger side.  The man's wife then quickly replied, "I guess I'm not putting my feet up on the dash any more." 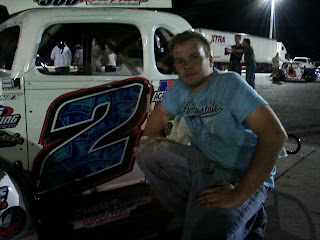 18 cars competed in the 30 lap exibition race, former I-94 Raceway driver "Showtime" Tyler Sjoman (photo above) from Alexandria MN started eigth row inside and slowly worked his way up front for the win follwed by Michael Ostdiek and Kyle Hansen.

Marcos Ambrose looked the fastest of the NASCAR guys, he was in second place with 10 laps remaining, but then got shuffled back and finished 6th.  Trevor Bayne looked good on the track, staying with the top group and finishing fourth, he jumped out of the car and said "this is the most fun I have had in a long time."

AJ Allmendinger finished 8th and Greg Biffle stayed out of trouble near the back of the pack, it was his first time in a Legends car and he didn't know what gear to race in, the first segment he was slow in fifth, but shifted to fourth in the final segment and was much better. 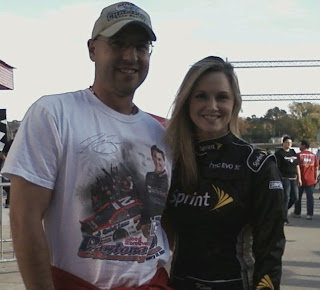 Ms. Sprint Cup Kim Coon (with Jason above) was the Emcee of the event and kept the program moving smoothly. 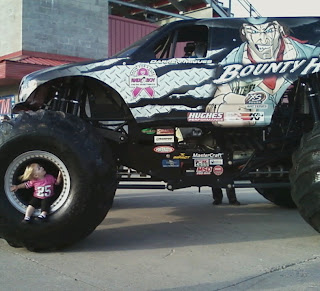 The "Bounty Hunter" monster truck (photo above) did an exibition show for the crowd, including a cyclone and a couple nice slap wheelies. 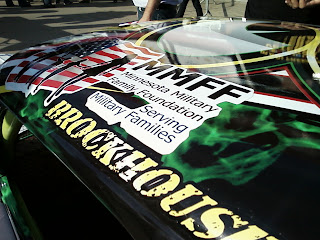 This event is named MN Motorsports teams give back, money raised during this charity event went to the Minnesota Millitary Family Foundation.  Many millitary members were on hand to enjoy the festivities at Elko Speedway.

I was impressed with the NASCAR drivers and their interaction with fans and our local drivers.  I saw Richard Petty, AJ Allmendinger and Greg Biffle walk through the pits after the races to talk with the local drivers, take pictures and sign their race cars.  Even during the pressures of a long season, these drivers seemed to enjoy themselves and give back at the same time.
Posted by Jason at 11:10 PM No comments:

By Dean Reller
Co-host of Speed Talk on 1360

Growing up, I was always a fan of racing no matter what form it was. That however was limited to watching NASCAR and the action at my local dirt track.  Over the years I became a fan of asphalt racing.  No matter the type, the basic premise was always go fast, turn left.

Now after 20 years being involved in racing in one capacity or another I’m finally developing a following for road racing, where the premise is go fast, turn left AND right.  A recent trip to Brainerd International Raceway’s 2.5 mile Competition Road Coarse to watch the SCCA Trans-Am Series gave me an up-close look at racing in a whole new light.  First off, unlike most race track’s that I go to, there isn’t a massive grandstand for fans to sit and watch the action.  Rather, race fans watch the race from the area INSIDE the track and that allows the racing to literally surround you.  With a variety of left and right hand turns and speeds as high as 140 MPH to as low as about 30 MPH, road racing has a little bit of everything.  Trading paint isn’t common and really isn’t encouraged, but that doesn’t mean that it does happen though.

One of the unique things is that the races start at the line between turn 13 and turn one, in an area mostly surrounded by trees for the wandering spectator, like me.  The Trans-Am cars start their races with a rolling start, but other classes use a standing start, which to me was rather interesting to see.  As I mentioned, that’s where the races start, but that is not where they finish.  The checkered flag waves from the stand that is located between turns 11 and 12, which is right in front of pit road. 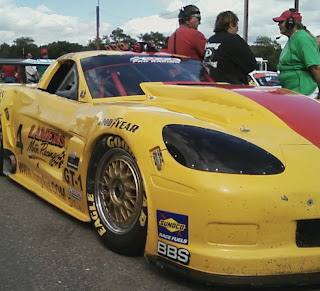 The racing at BIR was a two-day event with separate races on both days, which ended up providing two distinct types of racing.  The first day of racing saw plenty of action as drivers tried to find grip on the track that combines the old pavement of the original Donnybrooke Road Course and the new pavement of the Competition Road Course.  Veteran driver Tony Ave, winner of last year’s race, picked up where he left off as he took the lead from the start and wasn’t challenged much as he rolled to the win.  The driver to watch was Amy Ruman who tangled with another car on lap one in the fast part of the track.  After getting back on track and making a stop to repair her car, she put on a show as she passed some of the other cars and ended up finishing fourth. 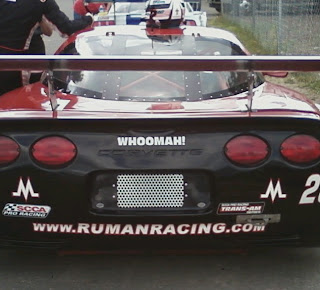 The second day of racing looked to be just as fast as Ave set a track record in qualifying with Ruman not far behind.  Drama would be the story of this race as a shower dampened the track before the race took the green.   Ave’s slipping clutch gave him problems on the opening lap as he spun in front of the field in the slowest and tightest areas of the track, which is where I just happened to be at the time.  Ruman ceased the opportunity as she took the lead and really began to pull away as Ave struggled to get back to the front.  Whenever a fast car has to come from the back, no matter what kind of racing you are watching, always makes for a fun race to watch.  Ave put on a show as he worked his way through the field.  While this was going on, dark clouds moved over the track and started out as drizzle, but quickly turned to a light rain.  Normally this is where I would see a Red Flag, the race would be stopped and I would run for cover.  But this is road racing and the race goes on.  I dawned my raincoat and didn’t do what my mother always taught me, I stayed out in the rain.  Several drivers would take off course adventures, but despite the very wet conditions, none of the drivers would go to the pits for rain tires which would have provided a lot more grip.  The wet track forced drivers to run the “Rain Line” which is a totally different way to run around the track.  Ruman ended up surrendering the lead to Ave as he didn’t seem to be phased by the wet conditions and went on to take the win.  Ruman would go off track three times during the race, but wound up finishing third.

Once thought of as some other kind of racing, road racing has really taught me a new appreciation for those who compete at it.  No wonder NASCAR has a couple events on road courses every year.  It’s truly a test of skill not only to compete, but to do it with the finesse and make it something that literally surrounds its fans. 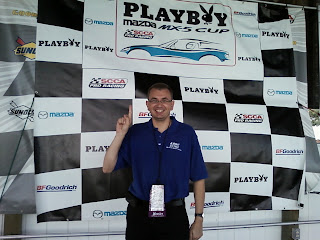 Listen to our pod-cast from the Brainerd International Raceway road course (below), Trans-Am stars Tony Ave and Amy Ruman are featured in part one.


Dean Reller and Jason Searcy have over 40 years combined experienced in motorsports.  They host the weekly program Speed Talk on 1360, Saturdays on KRWC AM 1360 April through September.  The program covers NASCAR and devotes a good portion of the show to local and regional racing as well.
Posted by Jason at 8:31 PM No comments:

Numerous NASCAR stars will be coming to Elko Speedway to race in a charity event, its the Minnesota Motorsports gives back & Millitary appreciation event on Thursday Oct 6th. 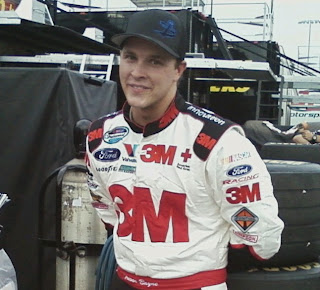 Daytona 500 winner Trevor Bayne (photo above) will be in attendace to race and sign autographs, he will be joined by Greg Biffle, AJ Allmendinger, Marcos Ambrose, Ricky Stenhouse, Jason Leffler & Erik Darnell.

NASCAR owner Jack Roush and Hall-of-fame driver Richard Petty will also be on hand during this special event.

They will do a special meet and greet with VIP's from 5-6pm and then with the General admission from 6-7:15pm.

The drivers will compete in a match up and exibition races beginning at 7:15pm.  Great North Legends drivers will also be racing.   A Monster Truck "Bounty Hunter" will also put on a show.

Jason will be reporting on this event, keep checking back for more updates on www.speedtalkon1360.com
Posted by Jason at 6:45 PM No comments: