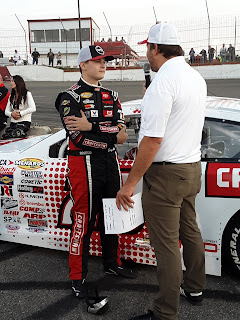 Excitement has never been lacking at Elko (MN) Speedway, the smallest racetrack on the ARCA Menards series always seems to pack the biggest punch when it comes to exciting finishes and 2021 was no exception. 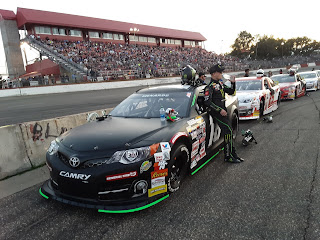 NASCAR owner Joe Gibbs was in attendance to watch his grandson #18 Ty Gibbs from Huntersville (NC) dominate a majority of the Menards 250, Ty Gibbs won the General Tire Pole award and he led 236 of the 250 laps.  Corey Heim #20 from Marietta (GA) snuck past Gibbs for a few laps after an early restart on lap 53 but then the two cars had a little contact on lap 62 and Gibbs took back the lead on lap 65.  Heim was not happy with the contact and he had the opportunity for payback late in the race. 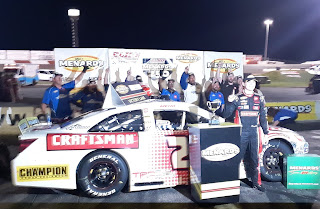 It looked like Gibbs was going to win the Menards 250 by a sizeable margain until #66 Ron Vandermeir Jr spun on lap 243, setting up a restart with just a handful of laps remaining.  Corey Heim lined in the second row directly behind Gibbs and when the green flag was displayed Heim bumped Gibbs and sent him up the track and leaving the door open for Heim to take the lead and then hold back both the #17 of Taylor Gray and #15 of Jesse Love as the cars went three-wide coming out of turn number two.  Heim then shot to the front and ended up winning by 0.593 seconds a couple laps later.  Jesse Love from Redwood City (GA) finished second, crowd favorite #25 Gracie Trotter from Denver (NC) was third and Ty Gibbs finished a disappointing fourth, Taylor Gray from Denver (NC) rounded out the top five finishers. 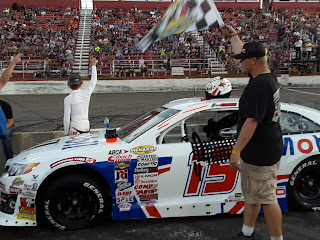 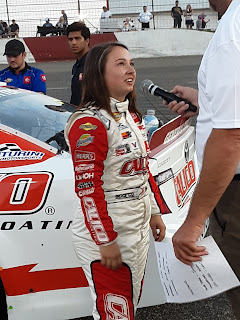 Nick Sanchez #2 from Miami (FL) was sixth, Daniel Dye #21 from Deland (FL) seventh, #10 Willie Mullins from Fredricksburg (VA) finished last car on the lead lap in 8th pleasing his many Minnesota relatives that were in attendance.  Richard Petty's grandson #46 Thad Moffitt from Trinity (NC) spun early in the race but raced hard to finish 9th and #30 Adam Lemke from Holister (CA) was 10th of the 17 cars in attendance.  The race had 7 caution periods and took 1 hour and 20 minutes. 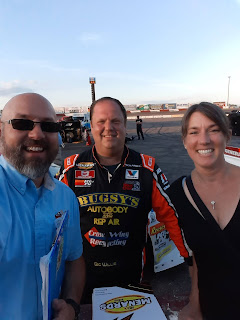 *Willie Mullins at driver autograph session
The Local NASCAR divisions at Elko Speedway also raced one feature event each for the ARCA crowd in attendance.  The Late Models sponsored by The Car Lot in New Prague had an impressive field of 26 cars start the 40 lap feature event.
Chris Marek #3 and Andrew Schultz #29 went side by side to start the race, Marek finally established himself as the leader on lap three.  Four-time Elko Speedway Champion Marek was then challenged by another veteran driver #52 Chad Walen who worked his way up from the sixth starting position to get alongside Marek on lap 10 and then passed him two laps later.  Chad Walen from Prior lake (MN) weaved through lapped traffic and held on to win by 1.565 seconds during this cautionless race and win for the first time this season at ELKO.  Andrew Schultz finished second, #13 Bryan Wrolstad third, Chris Marek was fourth and #21 Adam Bendzick was fifth.  Owin Giles #6 was 6th, 7-time Champion #72 Jacob Goede started 14th and finished 7th, #8 Billy Mohn 8th, #11 Buddy Kofoid the USAC National Midgets current point leader from Penn Grove (CA) started 23rd and finished 9th and #40 Michael Beamish was 10th.  Fast-qualifier #54 Dylan Moore had mechanical problems and did not finish.  Chad Walen no leads Jacob Goede by 1 point in the Late Model division point standings. 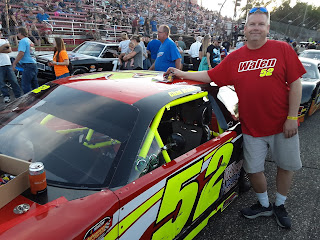 The Genz-Ryan Thunder Car 30 lap feature at ELKO had #75 Keith Paulsrud take the early lead until a caution happened on lap 9 for #25 Eric Campbell who tagged the wall.  After the restart #8 Taylor Goldman fought hard with Paulsrud and took the lead on lap 12, another caution happened on lap 20 when six-time ELKO Champ #3 Conrad Jorgenson had mechanical problems and dropped out.  Dillon Sellner #07 of Randolf (MN) who finished second in qualifying to Jorgenson by 0.001 seconds moved his way up the field from his 10th starting position and challenged Goldman side by side for a few laps and then took the lead just before the white flag flew.  Sellner ended up winning by 0.369 seconds, it was his first win of the season at ELKO.  Taylor Goldman was second, #92 Norm Grabinger finished third, #9 Adam Wiebusch fourth and #14 Tony Holm fifth of the 11 cars competing.  Dillon Sellner is now tied with Conrad Jorgenson for the lead in the season point standings at Elko Speedway. 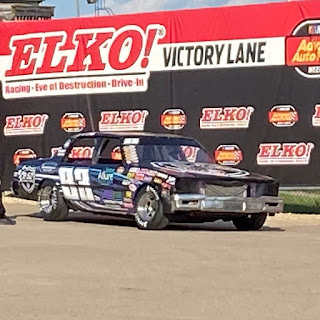 The Pepsi Powerstock 30 lap feature event had #19 James Tich take the early lead until #25 Jason Michaud grabbed the top spot with an outside pass coming to lap 2 of 30.  A yellow flag flew slowing the field on lap seven, after the restart on lap 9 #83 Julie Jorgenson (photo above) from Lakeville (MN) drove up from her 6th starting position and took over the lead with an outside pass, Jorgenson then extended her advantage to a full straight away lead.  Fast-qualifier #88 Nick Oxborough, who started 9th, finally made his way up to the front and was close enough to give Jorgenson a couple bumps in the closing laps.  Jorgenson held strong and won by 0.211 seconds at the finish line, it was her first win of the season, Oxborough was second, #62 Tom Doten finished third, #08 Mike Stoer was fourth and #13 Matt Frye fifth of the 13 cars entered.   Oxborough now leads Matt Frye by 29 points in the season point standings at Elko Speedway.

All results and points are unofficial at this time.

MN.  Get More information at ElkoSpeedway.com