2014 Power Stock division race was one to remember

The 2014 Power Stock division provided excitement, and action on a weekly basis at Elko Speedway.  The finale of the Power Stock season did not disappoint fans looking for drama as two rookies battled for the Championship. 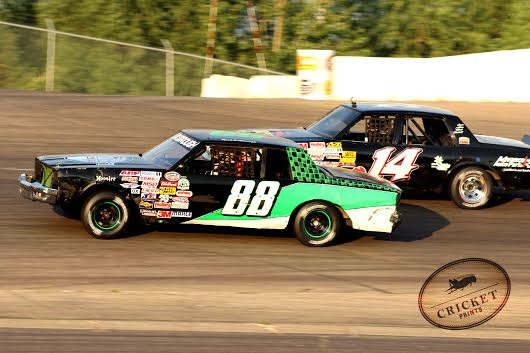 Coming into the final night, #88 Nick Oxborough was the leader, he had lead most of the season and picked up three wins in his rookie season at Elko Speedway.  He lead #14 Grant Brown by 4pts, Grant is the son of four time Sportsman/Big 8 Champion Doug Brown.  Before the races I talked to Doug about Grant, he said he was proud no matter what happens, he also said his advice to his 14 yr old son would be, "drive it like you stole it."

The heat race saw the two competitors race in the same heat with Brown finishing just ahead of Oxborough and knocking the margin down to two points.
A huge field of 24 cars started the feature event, the winner of the race gets 51 points, 2nd place 49 and then it goes down by one point per position after that.

Nick Oxborough started third row outside and Grant Brown began the race directly behind him knowing not only he would have to pass his rival but either he would have to win or finish more than one position ahead because Oxborough held the tie breaker with those three wins.
Veteran racer Tom Quade held the early lead then Dusty Mann driving the Ricky Martin car that won all those figure 8 championships at Raceway Park stuck to the bottom and took over on lap 6 of the 20 lap shootout, he would later win the race.  The racing up front was exciting but the drama was the battle for the Championship as Oxborough was in 5th and Brown got pushed back to 8th.
Both drivers narrowly avoided disaster during the race, the action was wild just in front of Oxborough as Taylor Goldman had contact and spun coming into corner number four then on the restart Shawn Prins was bumped and did a 360 right in front of the entire field.  Brown took advantage on the inside and passed Oxborough for the third position but time was running out, he needed help and got it from Paul Hamilton who passed Oxborough dropping him back to fifth meaning they were tied for points on the white flag lap.
Brown was two car lengths behind Cole Neisius for second, Neisius slipped and Brown got to his back bumper right as they crossed the stripe.  Oxborough held on the finish two positions behind Brown securing the Points Championship by the most narrow of margains.  After a full year of racing both drivers tied with 922 points, Oxborough won the Championship on a tie-breaker due to his 3 wins during the season.
Oxborough was thrilled to win in his rookie year, thanked his family and crew and vowed to come back next year to defend his Championship.

Brown went on Facebook after the races and posted this "Well, I had a lot of fun this year. My guys did a great job giving me the best car I have ever had. Ended up tying for championship win, but I lost the tiebreaker due to my amount of feature wins. But I still had a great time, and to me that is worth a lot more than a trophy."

Well said for anyone, let alone a 14 yr old.  Grant Brown surpassed the expectations of everyone in his rookie season, he was super strong and consistent he finished 2nd five times, well make that five runner-ups and one tie for a Championship.  From beginning to end racing in the 2014 Power Stocks division was one we won't soon forget.
Posted by Jason at 1:41 PM No comments: