Looking back 10 years, The last race at the MN State Fair 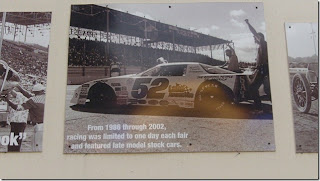 It’s hard to believe, but it’s been 10 years since the last race was held at the Minnesota State Fair.  Looking back to Monday September 2, 2002, the one thing that nobody really knew was that the race would be the last one on the historic half-mile race track.  Like many people, I was one of many who looked forward to watching the stars of the ASA Racing Series in their annual visit to Minnesota.

Unique to the Fair was the one day format with an afternoon race.  Practice time was minimal and the first 20 positions were determined by points with the remainder of the 33 car field determined by qualifying.  All time money winner at the Minnesota State Fair Speedway and most popular driver Dick Trickle started 21st and although he wasn’t in contention for the win, anytime Dick Trickle raced there, the fans would go crazy and once again they made the most noise as he was introduced prior to the race.  Point’s leader Joey Clanton led early on, but the race turned into a battle between Kevin Cywinski and Gary St. Amant.  The two traded the lead a few times before St. Amant finally took the lead with 109 laps remaining as he captured his only Minnesota State Fair win and got the chance to ring the Victory Bell following the race.  This would be final time for bell as a couple of months following the race the Fair Board announced exciting new plans to remodel the grandstand.  Unfortunately, the plan to make the grandstand better meant the end of the race track, much to the disappointment of the fans.  No final race celebration, nothing special noted, a quick and sudden end.

I have a personal connection to the final race as well.  At the time, I worked for I-94 Raceway , which was an ASA Member Track.  This allowed me the opportunity to meet some of the ASA Officials and I kindly volunteered my services for the race.  I wasn’t certain that I would get a chance to do anything, and then it happened, they needed someone for a very unique job.  The setup at the Minnesota State Fair Speedway was unique from most race tracks.  Race control was located inside the track on a scaffold that also held the announcers.  My job was to be up there and control the track lights, because unlike most race tracks, the controls were not on the flag stand, they were in the infield.  My job was relatively easy, watch the flagman, the late great, Tom Powell.  When he waved the flag, I turned on the light.  This was fun, but kind of nerve racking, because I kept thinking if I was too quick with the light, I could really mess up a restart.  Fortunately that didn’t happen, but they did have a few more switches than just on and off, remember this track has been around for years and had some very low tech equipment.  In fact it took two people to operate the scoreboard, that not only showed the leaders and the laps, but also the running time of the race, something you definitely don’t see these days.  After Gary St. Amant and everyone else took the checkered flag I remember turning on the red lights to signal to the drivers that the race was over.  Little did I know that I was the one who would do it for the final time in the history of the Minnesota State Fair Speedway. 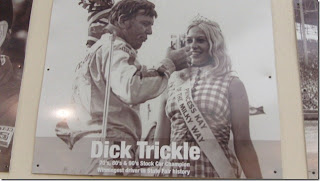 *photos on display at the MN State fair
Posted by Jason at 2:54 PM