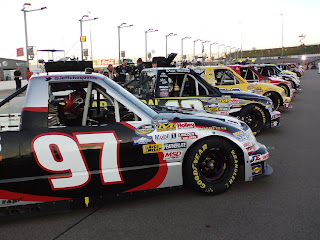 A very entertaining weekend of racing at Iowa Speedway with the NASCAR Camping World Trucks racing on Saturday night in front of an estimated 20,000 fans.  The race was broadcast to a national audience on SPEED, with prerace host and Iowa native Krista Voda (below). 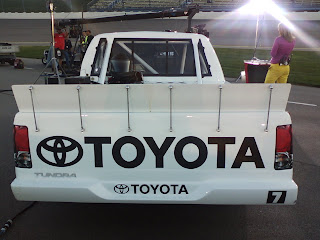 Ty Dillon (below) finished second place in the race, but was the big winner in the point standings.  He took over the lead in points and his closest competitors all had trouble (Timothy Peters finished 19th, James Buescher 17th and Parker Kligerman 23rd). 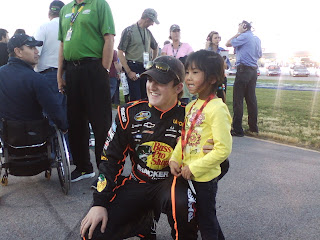 The race took just under two hours to complete and saw nine caution periods and numerous accidents including Justin Lofton getting caught up in a Caleb Roark wreck and Ron Hornaday Jr backing into the wall at about 120 mph (below). 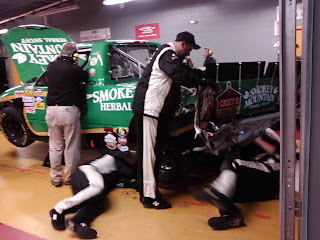 For the first time at Iowa Speedway, the drivers meeting was on stage and open to the public, it drew a huge crowd of spectators (below) trying to catch a view of the competitors and crew chiefs. 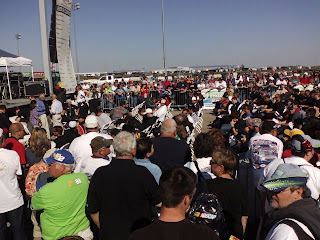 After the drivers meeting the NASCAR Chapel service was also open to the public, Jennifer Jo Cobb (driver of the truck below) gave an inspirational message to all in attendance, it was very well received. 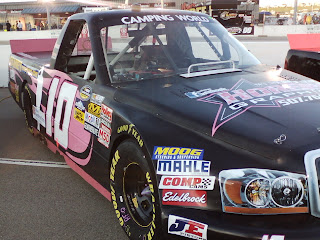 Ryan Blaney was the race winner at the age of 18, he is now the youngest ever to win in a NASCAR Camping World event.  He was a guest on our radio show the morning of the race and could not have been more accommodating for the media covering the event.

After the race we tracked down some drivers on pit road.  Listen Saturday morning 10-11am on www.krwc1360.com for interviews with Drew Herring who finished 7th, Jeff Choquette (#97 top of the story) who finished 9th, 3rd place finisher Todd Bodine and 5th place finisher Cale Gale (photo below) who took us for a lap on Iowa Speedway in a pace truck before the race. 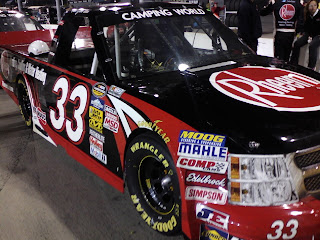 Click here for a full recap of the race http://racefansradio.blogspot.com/2012/09/ryan-blaney-becomes-youngest-ever-truck.html

Here is the audio recap of the race with interviews with Jeff Chochette, Drew Herring, Cale Gale, Todd Bodine and Ryan Blaney.  https://soundcloud.com/speedtalkon1360/2012-truck-series-at-iowa-m4a
Posted by Jason at 7:54 PM