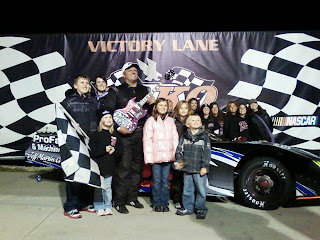 September 19, 2012 – Dan Ryan was a racer and someone who enjoyed big events and so it’s only fitting that the race honoring him is rapidly becoming one of the big events of the region as the ASA Midwest Tour Presented By SCAG Power Equipment and Lester Buildings joins the fold this year for the Thunderstruck 93 at Elko Speedway on Sept. 21st and 22nd.

Ryan, a popular racer at Elko was diagnosed with ALS, otherwise known as Lou Gehrig’s Disease in December of 2005.  Shortly thereafter, many members of the racing community formed a non-profit called A Race Worth Winning-ALS.  This group of volunteers has been working to create awareness of ALS and to raise money to help those suffering from ALS.  Ryan passed away from the disease on January 2, 2009 and his family wanted to create an event in his honor that would be something he would have enjoyed.  The name Thunderstruck came from his favorite song by AC/DC which Dan was known to do a fabulous air guitar of the song.  The number 93 was to recognize his racing number.  Dan’s favorite race was in Nashville and when it came time to decide the trophy for the Thunderstruck 93, it would only be fitting that it would be an electric guitar, just like the ones they have in Nashville.
Jacob Goede a former ECHO and ECHO Bearcat Touring Star won the inaugural race in 2009.  Dan Frederickson a past ASA Midwest Tour Champion, knew Dan Ryan very well and raced with Ryan’s son Jake.  This made the event special for him as he won the race in 2010 and again in 2011.   “I remember Dan’s first win, he must have sat in the car at the start/finish line for five minutes before he could collect himself to get out of the car,” said Nichole Fredrickson, Dan’s sister and member of A Race Worth Winning-ALS. “It meant that much to him.”  Many of the Elko competitors have this race highlighted on their calendar and a large number of them will be taking to the track to compete against the Stars and Cars of the ASA Midwest Tour.  Many of the drivers in the other divisions that will be racing this weekend are looking forward to not only racing, but to winning the Thunderstruck race in their respective divisions as well.
A Race Worth Winning-ALS will be holding several fund raising events throughout the weekend.  Live music from the band Rocket Club will follow the racing on Friday and Saturday will feature Karaoke Dave and the Pink Flamingo.  The Thunderstruck 93 looks to have everything in it to make it the perfect tribute to a respected former racer.
The Thunderstruck 93 will be on Friday and Saturday September 21st and 22nd at Elko Speedway, located in Elko, Minnesota.  Qualifying is scheduled for 5 PM, Friday, followed by qualifying races.  Saturday will feature an ASA Midwest Tour driver autograph session at 5:30, followed by opening ceremonies at 6:45 and the first green flag of the night will fly at 7 PM.  For more details visit asamidwesttour.com.

*photo Dan Fredrickson in victory lane for 2010 Thunderstruck
Posted by Jason at 11:14 PM