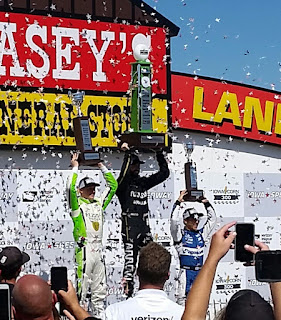 The mayor of Hinchtown takes his second win at Iowa.  James Hinchcliffe made a late race pass of dominant Josef Newgarden to win the IndyCar Iowa Corn 300 at the Iowa Speedway.

Josef Newgarden took the lead early on and dominated most of the race, but it was Hinchcliffe who made a great run in the last 50 laps that really locked up his bid for the win.  With 50 remaining, Hinch moved by second running Pigot and then 5 laps later, he moved by Newgarden to take the lead.  The blistering pace set by Newgarden coupled with only one caution (on lap 139) for Zach Veach put all but five cars on the lead lap headed into the stretch run.  It looked all but certain for Hinchcliffe, but Ed Carpenter spun to bring out the yellow with seven laps remaining.  With too little time remaining, the race ended under yellow giving the win to Hinchcliffe.  Pigot would finish second, Takuma Sato took home third, while Newgarden finished a disappointing fourth.