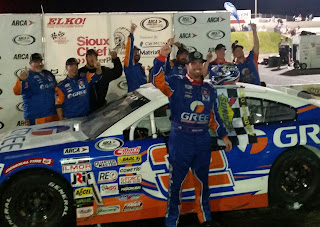 His crew chief Jamie Jones made a daring call to not pit for tires on lap 60 of the 250 lap race when almost all the other cars on the lead lap did so, the only other car not to pit was the #77 of Joe Graf Jr.

Gus Dean had the lead after that first caution period and led the race for 9 laps but then the strategy almost backfired as there was a long green flag run after that caution, Gus Dean went a lap down on older tires and then actually spun on the track on lap 160 putting him two laps down.  Dean then pitted for tires with the rest of the teams, but the difference was that his team had an extra set of tires as a result of not pitting on that first caution.  Dean did a great job of racing hard and being in position for the free pass.  Numerous cautions mid-race made it possible for him to get back on the lead lap and with those extra tires in the pits he had the advantage the last race run.

Sixteen year old Chandler Smith #20 was dominant for a large portion of the race and at one time had a half lap lead, he led 160 of the 250 laps in total.  Chase Purdy #8 and Chandler Smith  had a great battle for the lead after multiple restarts, after one of the restarts Smith spun, he went to the tail of the field and the car never seemed to be the same, he finished 6th. 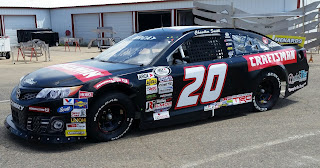 Chase Purdy #8 had the lead for 31 laps and looked to be on the way to his first career win until disaster struck with less than 10 laps remaining in the race, in dramatic fashion his car erupted into flames and the race was red flagged. 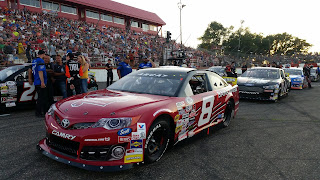 After a lengthy cleanup the final few laps of the race was very exciting and the large crowd rose to it's feet in unison.  Here was the race call with Jason and Dean.  Final Laps of 2018 ARCA race at ELKO


Gus Dean #32 was the winner, the margin of victory was .857, this was his first win for Win-Tron racing.
Here is our interview with an excited Gus Dean Winner interview at ELKO

The only other car on the same tire strategy as Gus Dean was the #77 car driven by Joe Graf Jr who drove a Bando car at Elko Speedway ten years ago when lived in Medina (MN) up until the age of 11, then the family moved to New Jersey.   Graf Jr drove a great race but was disappointed to finish in 3rd place after getting moved up the track by Gus Dean on the final restart. 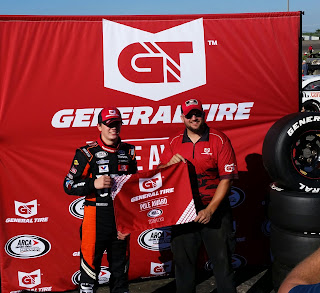 Local favorite #25 Natalie Decker drove a very smart race, she stayed on the lead lap and was aggressive late and moved up to finish a tie for her career best of 5th place.  Here is our post race interview with her Natalie Decker Interview

Point leader #28 Sheldon Creed had a tough night and finished 15th, second in points #41 Zane Smith started up front but faded back quickly, he finished a disappointing 12th.  Joe Gibbs developmental driver #18 Riley Herbst was in contention all night and finished 4th after starting the race last due to a part failure in qualifying, here is our post race interview with him Riley Herbst ELKO interview 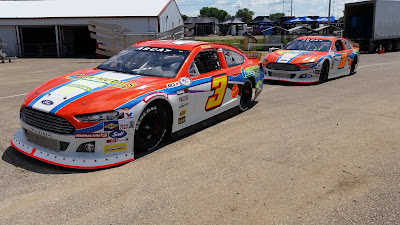 Former Viking player and current Vikings radio Color Commentator Pete Bercich is a big motorsports fan and was in attendance at the race.  MavTV broadcast the race LIVE. 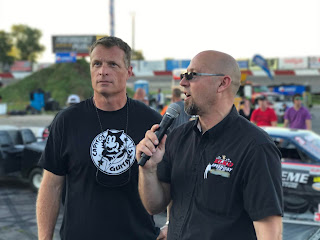 Listen to Speed Talk on 1360 radio Saturday 10-11am for a full recap of this event.  Listen on the free Tunein app by searching KRWC or KRWC1360.com