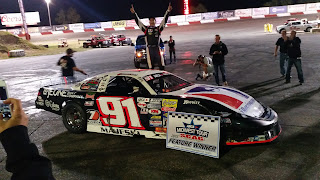 With one of the most improbable moves ever seen at Elko Speedway Ty Majeski from Seymore (WI) passed both Dan Fredrickson and Jacob Goede in the last three laps to win the 7th annual Thunderstruck93 ARCA Midwest tour race presented by NAPA Auto Parts.
Dan Fredrickson won fast time in qualifying with a lap of 13.595 seconds, Fredrickson is a four time winner of this event, and a two time Midwest tour Champion.  Jacob Goede is the 2009 winner of this event and he dominated racing at Elko Speedway this summer, scoring 10 wins in route to his second MN Corn Growers Super Late Model title.

Front row starters Steve Apel and Matt Goede battled for the top spot early, but then a spin by Paul Paine brought out the caution at lap 20 of this 125 lap race.  Majeski was involved in the accident and put to the back of the 26 car field.  "I dug myself in a hole early, I had some contact with the 27 car (Paine), just one of those racing deals," said Majeski "I tried to methodically make my way up through the field and I tried not to use too much tire, I knew the two guys I had to beat were up front already."

Dan Fredrickson and Jacob Goede were in the familiar position of racing each other for Thunderstruck glory.  In the 2012 race these same two guys battled throughout and then had contact on the last lap with Fredrickson pulling out the victory.
Fredrickson took the lead from his 10th starting spot just after the restart on lap 20, he and Goede then swapped the top spot numerous times with frequent side by side and close racing for the lead.
The traditional 10 minute break in the race is at lap 93, the number used by Dan Ryan, an Elko Speedway Hall of Fame member who died from A.L.S (Lou Gehrig's disease) in 2009 and who this race is a memorial for.

At the break and with 32 laps to go Dan Fredrickson was the leader with Jacob Goede second, Ty Majeski had made his way back up to fifth on the board.  On the restart Goede shot to the lead and the battle with Fredrickson continued.

Meanwhile Majeski was ready to pounce "When I got into third they were at least a straightaway in front, I didn't know if I would have enough time to get them but they started battling, they got into lapped traffic and I was able to make some ground up and make the move for the win" said Majeski.
Fredrickson and Goede raced so hard for the lead that they both wore out their tires and that opened up the door for Majeski to make one of the most epic runs to the front ever seen at Elko Speedway.  "I saw the top two were sliding each other up in the 3rd and 4th groove and I got underneath Fredrickson and cleared him and then got a good run on Goede, I got to the inside of him, trying to get at least even with him, I used him up a little bit in 3 and 4 and it was enough at the line" said Majeski. 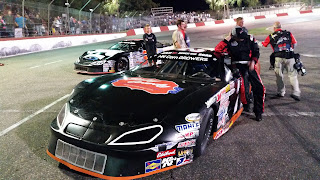 It was the closest finish in Thunderstruck93 history, Majeski beat Jacob Goede by only .054 seconds with Fredrickson a car length behind rounding out the podium trio.
"I've wanted this guitar (trophy) for a while, I almost had it last year and really wanted it this year," said Majeski "I'm really thankful for the Ryan family, its really special to win on this night, it means a lot to me for sure."

Here is a YouTube video of the wild final few laps of #Thunderstruck93 https://www.youtube.com/watch?v=mLCe-bxDGSI

Here is the audio interview with Ty Majeski after the races https://soundcloud.com/speedtalkon1360/ty-majeski-wins

Chris Weinkauf had a consistent run finishing 4th with veteran racer Tim Sauter in 5th and Jonathan Eilen finished 6th even though he had a tire slowly going down.
Full results can be found at www.arcamidwesttour.com 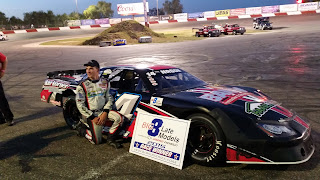 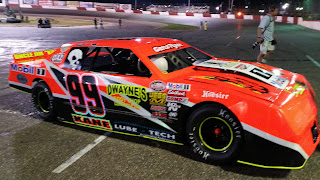 #99 Brent Kane from Lonsdale (MN) held off a great challenge by Jeremy Wolff to win his fourth Genz-Ryan Thunder Car title at Elko Speedway.
Both drivers won their heat races, Wolff won his heat in spectacular fashion, going three wide in the closing laps not once but twice bringing the large Thuunderstruck93 crowd to its feet.
The two drivers started the feature side by side in the fifth row.  Kane had a 9 point cushion so Wolff had to get to the front and hope that Kane had problems.  Wolff did his part, weaving through traffic and passing cars left and right, but Devin Schmidt from Belle Plane (MN) ran away from the field, took a big lead, and won his second feature of the year by 1.978 seconds.
Wolff finished second and Kane did the smart thing, held his position, finished 6th and won the Championship by 5 points.  Kane was emotional in victory lane thanking his crew, sponsors and all the people who had helped him win 9 races in 2015.
Eric Campbell finished third, Tina Davis fourth and Dillon Sellner fifth in points. 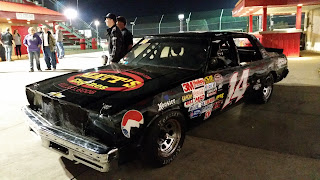 15 year old Grant Brown from Prior Lake (MN) won his first ever Pepsi Power Stock Championship at Elko Speedway.  Brown finished the feature in second place and won the title by 56 points over Tom Doten with Taylor Goldman third, Brandon Peterson finishing fourth and Paul Hamilton fifth.
The 20 lap and 22 car feature had a wild ending.  Joey Prusak from Hopkins (MN) was declared the winner.  Paul Hamilton led most of the race, he was caught by Brandon Peterson on the last lap and the two had contact through turns 3 and 4.  Hamilton ended up with heavy damage and into the wall and Peterson was disqualified giving Prusak his first ever win at Elko Speedway. 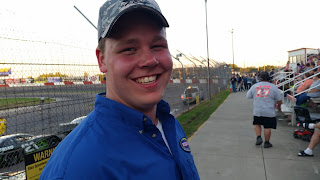 It has been a challenging season for Prusak who has struggled with mechanical problems and bad luck all year long, but his luck changed at the right time.  "I told my dad that I didn't care if I won a race all year long just as long as I win Thunderstruck93!" said Prusak.

Derek Lemke from Shakopee (MN) won his 4th Great North Legends feature of the year, he beat 16 year old Wil McCully by 2.044 seconds at the line, it was a career best finish for McCully.  Shon Jacobsen finished third, Brady Fox-Rhode fourth and Jaycen Brockhouse fifth.
With the win Lemke extended his lead to 25 points over Brockhouse in the race for the Championship.  The Great North Legends will crown their Champion next Saturday night October 3rd at Elko Speedway.

Matt Suhl from Richfield (MN) won his second Hornets feature of 2015.  Suhl started up front and stayed there the entire 15 lap race.  Alex Vincent gave Suhl a good run but Suhl ended up winning by .226 seconds with Craig Allers finishing third and Ashley Bell fourth.
Justin Schelitzche finished the race in 7th but still has a sizeable lead in the race for the Hornets Championship.  Schelitzche leads Ashley Bell by 49 points going into the final night of racing next Saturday October 3rd.

For full results and point standings go to www.ElkoSpeedway.com/results 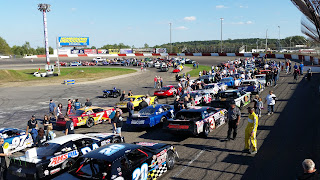 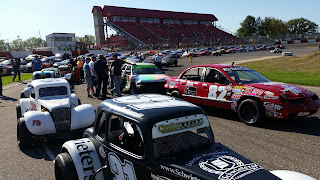 The #Thunderstruck93 event saw a great turnout for the on-track autograph session, over 100 cars participated before the racing began at 4pm.  Thunderstruck93 is in memory of Elko Speedway Hall of Fame racer Dan Ryan who passed away in 2009, it has raised thousands of dollars to help fight ALS, to donate go to www.araceworthwinning.org

Up next at Elko Speedway is the final race of the 2015 season and Eve of Destruction presented by Leo's South on Saturday October 3rd.  Champions will be crowned in the Hornets, Great North Legends and Bandoleros divisions plus entertainment by the Green Mamba Jet car, Burn out contest, the world famous Figure 8 trailer race and much more.  The evening will conclude with a huge Rock n Roll Fireworks show.  Gates open at 5pm, action begins at 6pm.

Elko Speedway is located 20 minutes South of the Twin Cities just off of I-35 and County Road 2, get more information by calling (952) 461-7223, go to www.elkospeedway.com or follow Elko Speedway on Facebook, Twitter and YouTube.
Posted by Jason at 9:13 AM