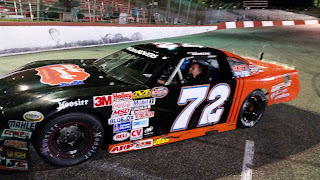 2003 Champion Danny Fredrickson led most of the 40 lap main event until getting challenged for the top spot by Matt Goede with 15 laps remaining, after hard racing for ten laps Matt Goede finally took the lead from Fredrickson but contact in corner two sent Goede spinning and then both cars exited the track for the pits.  That put 3rd place runner Jacob Goede to the lead and eventually the win by .725 seconds over Billy Mohn. 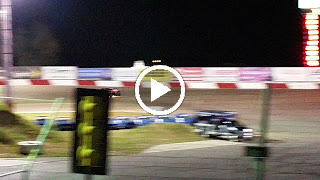 Here is the link to the YouTube video https://www.youtube.com/watch?v=mzcz7UXHP2o

Jacob Goede won his second Elko Speedway point title by 108 points over his brother Matt Goede.  "It's been a great year, an awesome year" said Jacob "it feels as good as last year, actually better, because the first one was like taking a big weight off my shoulders."

Goede said the key to his championship was having a fast car, he was the fastest of the 19 cars in qualifying with a time of 13.751, "what I'm most proud of is that we set fast-time in qualifying every night, all year, I don't think that has ever been done before," said Goede. 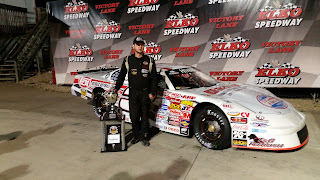 Dylan Moore from Northfield was just one lap short of being the 10th different winner in the Hiway Federal Credit Union BIG 8 Division at Elko Speedway.  A last lap incident between Moore and Chris Marek resulted in Moore finishing in the pits and Marek scoring his worst finish of the year in 16th position.

Michael Ostdiek from Lakeville (MN) took advantage of the top two dropping back to score his third win of 2015, he won by .250 seconds over Michael Beamish in the very competitive 18 car field.

Even with the poor finish, Chris Marek won his third consecutive BIG 8 season Championship, he finished 71 points ahead of Ryan Kamish in the final standings and had a very impressive total of 12 feature wins in 2015.

Conrad Jorgenson from Lakeville (MN) won his sixth Genz-Ryan Thunder Car main event this year at Elko Speedway.  Jorgenson started up front and had a huge lead until Adam Wiebusch spun just before the white flag lap, after the restart Jorgenson slipped in some oil on the final corner but held off a hard charging Jeremy Wolff by a mere .027 seconds to score the win.  It was the 107th career win for Conrad Jorgenson.

Brent Kane started the 25 lap race in seventh in the nineteen car field, he moved up to third at the finish, right behind Jeremy Wolff, his closest competitor in the race for the title.  Kane now leads Wolff by only 9 points going into the final points race in the Thunder Car division at #Thunderstruck93 next Saturday night.

Dusty Mann from Farmington (MN) won his third Pepsi Power Stock feature of the year, he led this impressive 22 car field from start to finish.  The twenty lap race went quickly with no cautions to slow the action.  Tom Doten gave it all he had to finish second, he was .285 seconds behind Mann at the finish.

Point leader and six time winner Grant Brown started tenth and could only work his way up to 6th at the finish, just ahead of four time winner Taylor Goldman.  Brown won his heat race earlier in the night though and they helped him to increase his lead to 30 points over Tom Doten in the race for the 2015 Championship.  The final point race for the Power Stocks will be Saturday night during #Thunderstruck93 at Elko Speedway. 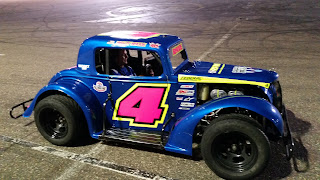 Jaycen Brockhouse was cruising to victory with a big lead in the Great North Legends main event until a caution with five laps remaining closed the gap and opened the door for Brady Fox Rhode to sneak past him and claim his 6th win of the season at Elko Speedway, doubling the win total of any of his rivals.

Rhode won by a whisker, only .069 over Brockhouse at the finish line with Derek Lemke following close behind in third.

Lemke now has a 25 point lead over Brockhouse in the race for the Championship, Fox-Rhode is a distant third after missing a race night earlier in the season to attend his grandparents 60th wedding anniversary.  When asked if he regretted missing a race night and his chance for the point title Fox-Rhode said "family is the most important and it was a fun day" but he added that he might be a little bitter at the awards banquet. 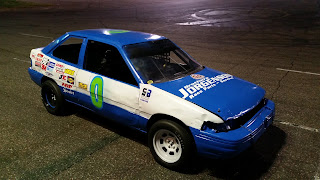 Defending Hornets Champion Brian Adams from Shakopee (MN) has had a season full of mechanical failures and bad luck driving three different cars, but that all changed on Saturday night with his first win of the year.  "This was my Championship car from last year," said Adams "I got an offer last week to buy it back, I got it and I couldn't be any happier to have it back."

Adams was a part of some great three wide action on his way to the front and then he battled with TJ Christensen for the lead at the end. 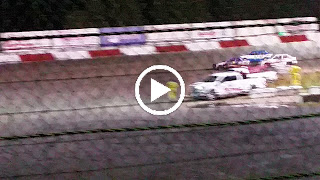 Here is the link to the YouTube video https://www.youtube.com/watch?v=wP6seHfKCeo

"It's awesome, its been a really tough year, I've struggled all season long, its been an uphill battle and it just feels good to finally redeem myself with a win" said Adams.  Nine different drivers have now gone to victory lane this season in the Hornets division at Elko Speedway.

Here is my audio interview with Brian Adams after the race https://soundcloud.com/speedtalkon1360/brian-adams-hornets-winner-at

Justin Schelitzche started 11th and moved up to finish fourth, he now has a 52 point lead over Ashley Bell in the race for the Championship.

Luke Allen from Chanhassen (MN) won the Bandoleros main event, he and Owin Giles now both have six feature wins on the season.  Giles has a 21 point lead over Allen in the point standings.

For Full Results go to www.ElkoSpeedway.com/results

The Great North Legends, Bandoleros and Hornets will all decide their Champions during Eve of Destruction October 3rd at Elko Speedway.

Up next a Elko Speedway is the 7th annual #Thunderstruck93 event presented by NAPA auto parts on Saturday September 26th, a race in memory of Dan Ryan and to benefit the fight against A.L.S. better known as Lou Gehrig's disease.  Get more information atwww.araceworthwinning.org

Thunderstruck93 on Saturday September 26th will feature racing in the ARCA Midwest tour Super Late Model series, the BIG 8 series, the Thunder Cars and Power Stocks will both crown their Champions and also racing in the Great North Legends and Hornets divisions.  Gates will open at 3pm with an immediate on-track autograph session, followed by qualifying beginning at 4pm with feature races in all divisions to follow.  The famous Pink Flamingo party will take place immediately following the races in Champions event center.

Elko Speedway is located 20 minutes South of the Twin Cities just off of I-35 and County Road 2 in Elko (MN).  Get more information by following Elko Speedway on Facebook, Twitter and YouTube or go to www.ElkoSpeedway.com or phone (952) 461-7223.
Posted by Jason at 3:20 AM