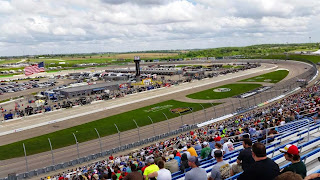 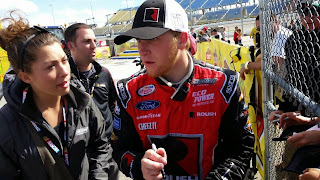 Chris Buescher lead 94 laps and won the 3M 250 at Iowa Speedway, the 10th race of the 2015 Xfinity series season.  Buescher took two tires on the final restart, started in the second row and blew by Chase Elliott by .523 seconds at the stripe for the win.

"That was awesome, it's pretty special, we had extremely fast Ford all day and my guys were flawless in the pits," said Buescher.  "I was estatic when we saw that late caution come out, we had tires left, so everything worked out exactly the way we needed to" said Buescher.

The Roush-Fenway driver of the #60 car was very happy with how Iowa Speedway raced this time around.
"I feel like the last few races it was more one groove racing, this time we had Three-wide on occasion, I feel like the track today raced exactly how it was designed to" said Buescher.

Buescher took over the point lead by 8 over Ty Dillon and 31 points over Chase Elliott.

Elliott (below) lead 114 laps but was out of tires, he did not pit and was a sitting duck at the end of the race during the Green White Checkered finish. 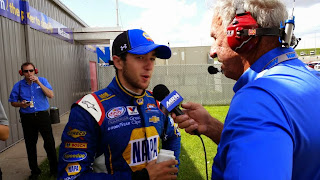 The #20 Car won the Pole Position driven by Drew Herring but the registered driver of that car, rising NASCAR star Erik Jones had to start the race from 37th on the grid.  Jones missed qualifying because he was a stand-by driver for a recovering Kyle Bush in Charlotte.  Jones fought his way up to third at the finish but never lead in the 250 lap race.

Daniel Suarez lead 48 laps early in the race but ran out of fuel before the final caution, he finished 18th.  Ty Dillon ran in the Top 10 all day long but had a flat tire late in the race, he finished 14th.

Road Course ringer Boris Said had a miserable day in the #54 car for JGR.  He had a terrible qualifying results starting 24th and he was non competitive on race day finishing 26th, 5 laps down to the leaders. 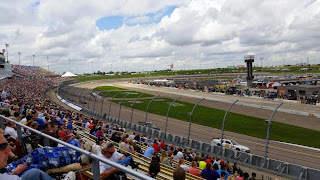 Veteran driver J.J. Yeley (below) was treated and released from the infield care center, he was not happy with rookie driver Brennan Poole after his car was wrecked late in the race.  The two drivers also had an incident early in the race.  Yeley said the first incident was a racing deal and not intentional.  Yeley didnt like that Poole seemed to come after him in retaliation especially because he drives for a lower budget team and they don't have extra cars to race. 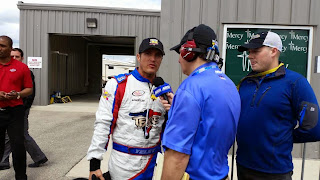 Tire strategy put Ryan Reed on the front row for the Green White Checkered restart at the end of the race, but he was quickly gobbled up and dropped back to finish 12th.  "We gambled early and took our tires, and then when we were put in the middle (on the final restart) we had nowhere to go, but that's racing, still a good day" said Reed. 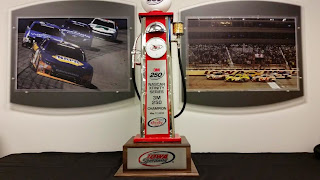 Here is a link to the PODCAST of our recap of the 3M250 and interviews with Chris Buescher and Ryan Reed on Speed Talk on 1360 Radio  https://soundcloud.com/dean-reller/iowa-recap-and-local-interviews-from-speed-talk-on-1360-5-23-15