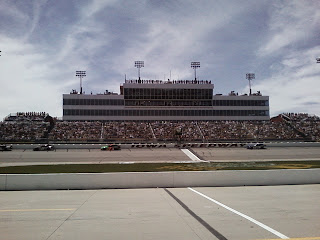 The Xfinity series races at Iowa Speedway in the 3M 250 on Sunday May 17th.  This race provides some interesting story lines highlighting some of the future and current stars in NASCAR.

Ty Dillon leads Chris Beuscher by 9 points in the Driver point standings with both Chase Elliott and Bubba Wallace 37 points behind.

Other notables in the field include:

Road Course Ace Boris Said will be driving the #54 car for Joe Gibbs, it will be interesting to see how Said adapts to Oval racing.

Budding Super Star Erik Jones will be driving the #20 Joe Gibbs car, he has turned lots of heads lately filling in for Denny Hamlin and Kyle Busch most recently in the Cup series.  Toyota management have said they will not lose Jones to another manufacturer, he will have a top quality ride in a Toyota from now on.

Ryan Blaney will be in the Penske #22 car, this car has dominated the Owner Points so far.  In the first 9 races of the season, they have 3 wins and 7 "top 2" finishes.  Remember Blaney has done well at Iowa in the past, he won in the Truck series in 2012 and at that time he was the youngest ever winner in that series.  We were there to cover it. 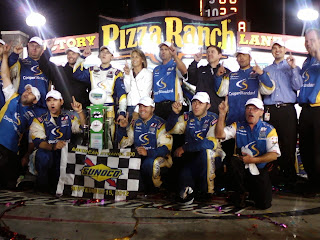 Fan Favorite Kenny Wallace will again be driving the #29 car for RAB.  Here is when Dean caught up with Kenny a few years ago at Iowa Speedway. 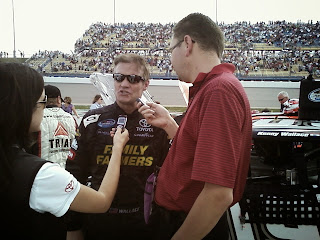 Elliott Sadler will be back in the #1 car, he is the only driver in the field who has won at Iowa Speedway in this series, he won in 2012 in front of 50,000 fans, here was our story of that race.
http://racefansradio.blogspot.com/2012/08/sadler-wins-at-iowa-speedway.html

Ben Rhodes will be driving the #88 car for JR Motorsports, it is his first Xfinity start, but he has raced numerous times at Iowa Speedway, he won the K&N Pro Series Spring race in 2014.  He will miss his High School Graduation Ceremony but will be presented with his Diploma during Driver Introductions.

Jamie Dick will be returning to action in the #55 car for the first time since being diagnosed with Diabetes, Dick missed 5 races.

I would recommend going to the track, tickets are available, a driver autograph session will be held in the concourse at 10am Sunday morning.  This is as close as you will get to drivers anywhere on the circuit.  The drivers then will walk down the concourse to the Newton Club for the Drivers meeting at 11am.


It should be a good race, Iowa Speedway always provides drama.  Keep checking back to this page and our social media for Photo's, interviews and updates during 3M 250 Race Day at Iowa Speedway.  Plus full coverage next Saturday morning 10-11am on Speed Talk on 1360 Radio www.krwc1360.com