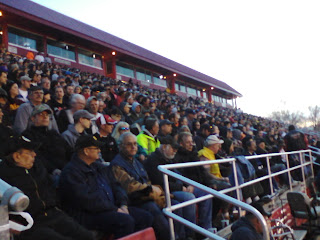 The weather shortened the amount of spring dirt racing to just one weekend, but it was an action packed two day event at Elko Speedway.  A near capacity crowd was thrilled by the awesome speed of the World of Outlaws sprint cars on Friday night. 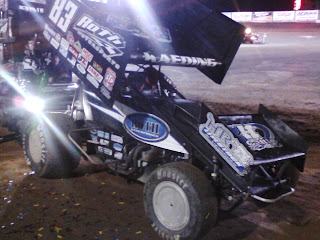 32 Sprint cars raced and Sam Hafertepe set a fast time in qualifying at 12.507.  #83 Tim Kaeding worked his way from his 13th starting position to win the $10,000  main event, passing Kerry Madsen right up by the wall for the victory.  "Live or die on the high side, that is my motto," said Kaeding.  The race was shortened because of a brief rain shower that forced officials to end the race at lap 34 of a scheduled 40.  Local Minnesota driver #7 Craig Dollansky finished 3rd after leading many laps. 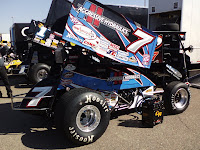 Johnny Parsons III won the UMSS Traditional Sprint Car main event, 15 non-winged cars raced at Elko Speedway, its highest car count in the short three year history of the series.  "I was lucky to get in on the ground floor with this group," said Parsons "its getting a lot tougher to win in this series, so this one means that much more."  Katrina Sautbine (below) blew a motor in the heat race resulting in a fire.  Here is a youtube video of this frightening moment, it begins at the 2:25 mark.  She escaped with only very minor burns.
http://www.youtube.com/watch?v=Un_ozp2vD_c

Cold temperatures and wind moved in on Saturday night for the Corn Belt Clash dirt Super Late Models.  Rick Wendling (below) won the 35 lap main event and took home the top prize.  "The rubber laid down, do we could really wing it into the corner and stand on the gas, it was fun," said Wendling.  He rolled his car on Wednesday night in Dubuque, so going to victory lane was a much better way to end the week.  He now has nearly 300 wins in his long racing career. 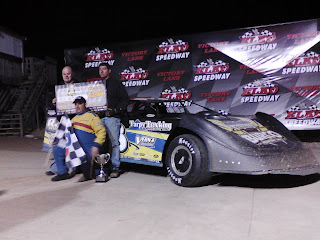 Dan Wheeler won the Elko Mod main event, Blake Dorweiler took home a trophy in the action filled Hornet feature and Tim Brockhouse kept his perfect dirt record at Elko Speedway intact by winning the Great North Legends main.
The dirt season is now on hold until the Fall Dirt Nationals on October 4th and 5th.  The Asphalt season begins Saturday May 18th with the NASCAR Whelen All American series Opening day with 5 divisions of racing, spectator gates open at 5pm and racing begins at 7pm.
Get more information at www.elkospeedway.com or call (952) 461-7223.
Posted by Jason at 9:49 PM