Self Wins Second Straight at BIR 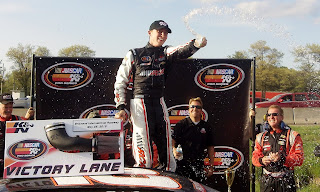 For the second year in a row, Michael Self found himself in the lead in the late stages of the race and once again he came out on top in the NAPA Know-How 125 for the NASCAR K&N Pro Series West at Brainerd International Raceway.  Andrew Ranger established the Track Record in Qualifying to with a lap of 96.330 MPH to claim the Coors Light Pole Award. 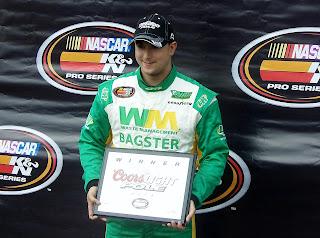 Derek Thorn took the lead away from Ranger at the drop of the green,  Thorn, Cameron Hayley and Self quickly broke away from the others.  Thorn would develop a tire problem, causing him to pit and surrender the lead to Hayley.  A caution a couple of laps latter sent the leaders to pit for fuel, but Thorn who had already pitted, inherited the lead by the time the race restarted.  Hayley and Self quickly caught the leader and on lap 29, Hayley was back in front.  A couple of laps later, Daryl Harr blew his engine near the start/finish line, prompting a lengthy red flag for the cleanup.  When the action resumed Hayley held the lead over Self, before he cut down a tire, forcing him into the pits. 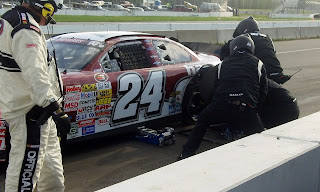 Self took over out front with Ranger now threatening in second.  With eight laps remaining, Ranger spun in the back half of the track, forcing him to the pits and out of contention.  Self soon found himself with a sizeable lead.

Thorn who was now in second, cut the margin greatly in the last few laps, but it was too little, too late as Self took the win by .952 seconds over Thorn. 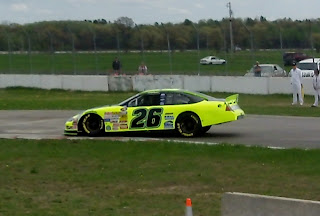 Greg Pursley who was never a factor all day finished third with Dylan Lupton fourth and Hayley recovering from his tire trouble to finish fifth.