Iowa Speedway in Newton IA is the host of two race events this weekend.  The NASCAR Nationwide series returns for the second time in 2011 on Saturday evening and the ASA Midwest tour will race on Friday night.

Ricky Stenhouse Jr won at Iowa Speedway in the Nationwide race in May, he passed Roush/Fenway team mate Carl Edwards and held him off for the win.  Not many wrecks but lots of passing in that race with 17 lead changes among 7 different drivers.  Bad Brad Keselowski finished third and Reed Sorenson fourth after leading for a good part of the race. 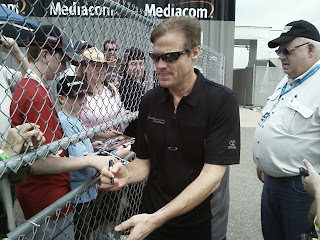 This was Kenny Wallace's 500th career Nationwide series start (photo above) and he was very happy to hold on to finish 6th after using pit strategy to stay up front on the final pit stop.

Trevor Bayne will be returning to Iowa Speedway for the first time since his big Daytona 500 win, he was recovering from an illness in May and missed the Iowa race.  He finished 5th place at Iowa in 2010 and was the pole sitter. 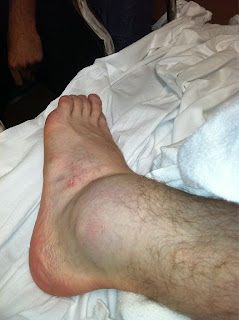 Brad Keselowski said he wanted to race this weekend at Iowa Speedway, but with a badly sprained ankle (photo above) from a practice crash at Road Atlanta on Wednesday, he will be replaced by Sam Hornish Jr.

The Nationwide point standings are as close as can be with 13 races left in the 2011 season, Ricky Stenhouse leads Reed Sorenson by only 3pts and Elliott Sadler is 24pts behind in third.

The ASA Midwest tour Super Late Model cars have raced at Iowa Speedway twice before.  The 2008 race helped Iowa Speedway prove to NASCAR that they can host a big event, it drew over 14,000 spectators for the Twin 75 lap race.  Matt Kenseth finished 3rd and Kyle Busch drove through the field and lead some laps before motor problems.  Tim Schendel won the race followed by MN driver Jonathan Eilen.

In 2009 Chris Wimmer won when Tim Schendel had a tire going down with a couple laps to go, Schendel finished 2nd and Jonathan Eilen finished third.

The ASA Midwest tour cars really go on this track, they will be just as fast or faster than the Nationwide series cars.  Even though the 7/8th mile track is bigger than the usual short tracks they race on, they easily can go two or three wide in the corners.  Tim Schendel should be the favorite going into the Iowa race, he is doing "double duty" racing both Nationwide and the Super Late Models.  He has lots of big track experience and he loves this place.  Chris Wimmer and Ross Kenseth should also be right up front, but dont count out MN driver Nick Murgic, he has lead laps at this place and is a good sneak pick. 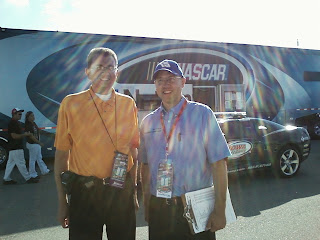 Speedtalk on 1360 radio will be LIVE at Iowa Speedway Saturday morning 10-11am and we will have interviews with all the top finishers of the ASA Midwest tour event, along with some NASCAR Nationwide drivers.  Listen live at http://www.krwc1360.com/ and check back to http://www.speedtalkon1360.com/ for more race details as they happen.

*injury photo courtesy of Brad Keselowski on Twitter.
Posted by Jason at 12:30 PM