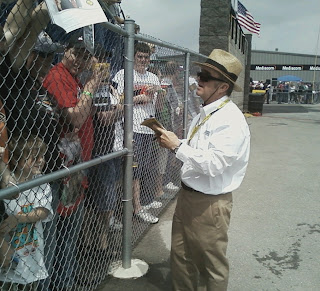 After the Iowa Speedway race in the press conference I asked car owner Jack Roush (photo above) if he would prefer Carl Edwards to race the entire season in the NASCAR Nationwide series in 2012.

Roush said he the Cup/Nationwide companion races are beneficial to run both, but in the stand alone races (like Iowa Speedway) the benefit that Edwards would get today is not what a younger driver would get.

Roush said "I think he's made his decision, I think he will become a sportscaster for ESPN for the Nationwide races, so I'm not sure if he will be doing just the companion races or all the races."

ESPN said Monday that they do not have anything to announce about Edwards at this time.

Edwards has joined the broadcast booth twice this year and is very comfortable behind the camera.  Many think he would do a great job as a part-time Nationwide broadcaster and maybe move full-time to the booth sometime much later in his career.

Here is the link to the LIVE post-race press conference at Iowa Speedway.  Fast forward to the 9:00 mark to hear the Jack Roush comments http://www.ustream.tv/recorded/16485080