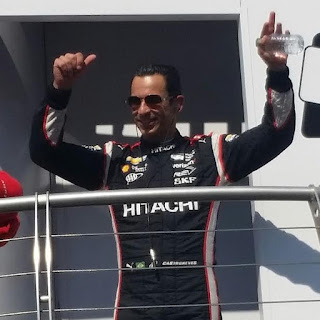 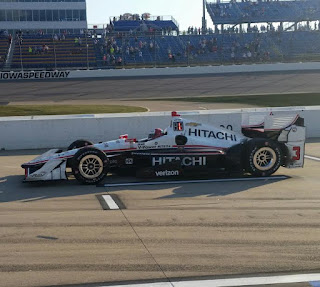 Rumors swirled this week that it might be the final year of racing for Team Penske in IndyCar for Helio Castroneves, he silenced those rumors and ended his long winless drought of 1,134 days on Sunday July 9th 2017 by winning the Iowa Corn 300 at Iowa Speedway.  It was his 30th career win. He led 217 laps (out of 300) in the race and now is fourth all-time in laps led with 5,947.  The media was instructed not to ask Helio about his upcoming contract in the post-race press conference, we were told that all questions should be addressed to Team Penske and at this time they have no comment. 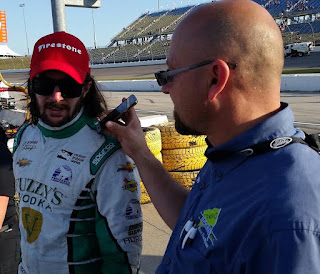 JR Hildebrand (photo above) led 38 laps but had older tires at the end and held on for second place.  Here is the Speed Talk on 1360 Exclusive interview with Hildebrand after the race.   https://soundcloud.com/speedtalkon1360/jr-hildebrand-2nd-place-at 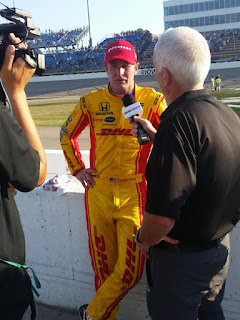 Ryan Hunter-Reay (photo above) is a three time winner of this race, he started 15th on the grid and drove his way up to third.  The race was Red Flagged for a very brief time on lap 208 for Rain.  It also was very hot with air temperatures in the 90's and track temperatures above 130 degrees. 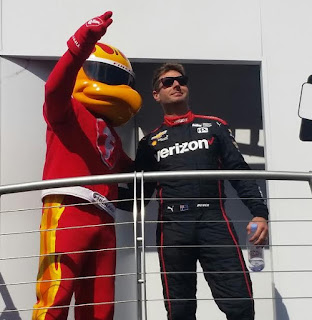 Will Power (photo above) started the race on the Pole, led the race three different times for 23 laps but dropped back after the last caution period and finished fourth. 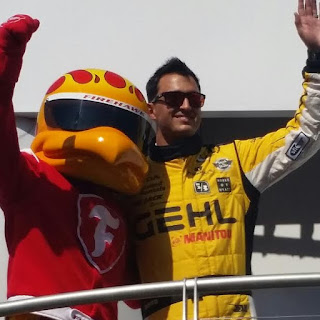 Graham Rahal (above) finished the race in the fifth position 10.1811 seconds behind the leader.  2016 race winner Josef Newgarden started the race 16th and finished 6th. 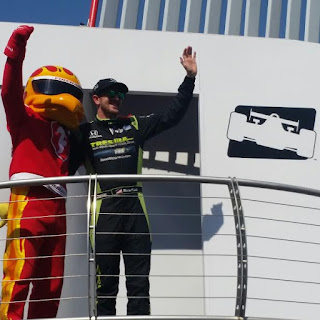 Charlie Kimball (photo above) started the race 14th and with pit strategy actually led ten laps in the second half of the race but he dropped to 15th at the finish.  Here is a Speed Talk on 1360 exclusive interview with Charlie Kimball https://soundcloud.com/speedtalkon1360/charlie-kimball-15th-at-iowa 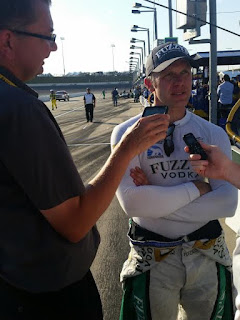 Ed Carpenter (photo above) did the Kids "Q and A" earlier in the day and started the race in 4th, he dropped back and finished 12th.  Here is an exclusive Speed Talk on 1360 interview with Ed Carpenter.  https://soundcloud.com/dean-reller/ed-carpenter-p20

Here is the article about the Kids "Q and A" at Iowa Speedway.  https://racefansradio.blogspot.com/2017/07/kids-q-at-iowa-speedway.html

Point leader Scott Dixon had a poor qualifying effort starting the race 17th, he finished the race in 8th.

We will have a full recap of the Iowa Corn 300 Verizon IndyCar series race including commentary and full interviews with Jason and Dean Saturday 10-11am (CDT) on Speed Talk on 1360 radio.  Listen on KRWC1360.com or search KRWC on the free Tunein app.


Here is a :50 Sound Bite of the opening laps for the IndyCar race at Iowa Speedway.  https://soundcloud.com/speedtalkon1360/indycar-sfx-at-iowa-speedway