Jacob Goede from Carver (MN) has been named the 2015 Minnesota Asphalt Driver of the Year. 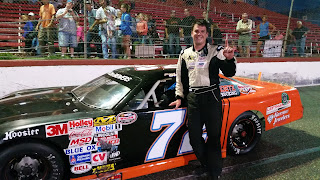 This is the second year in a row that Goede has won this award.  Jacob won ten feature events and his second track Championship at Elko (MN) Speedway in 2015 plus he was the fastest qualifier in every points event the entire year.  "Elko has great competition, so to do that I was pretty stoked," said Goede "going into the final night my number one goal to maintain that qualifying streak and we got it done."

Goede also was incredibly close to winning the Midwest Tour Thunderstruck93 event, leading numerous times and losing to Ty Majeski by 2 feet at the finish line.  "Thats what racing is all about, we need to put a good show on for the fans," said Goede "I don't think I've ever driven that hard the last 30 laps."

Midwest tour announcer Eric Huenefeld said it was the best Super Late Model race he had ever seen and the top 3 competitors were given lots of accolades for exciting but clean racing.  "Danny Fredrickson was right there the whole time and he got into me a little bit and then I got into him a little to take the lead," said Goede "it was all just a little rubbing, we all respect each other, it was awesome racing, if we could do that every week the stands would be packed." 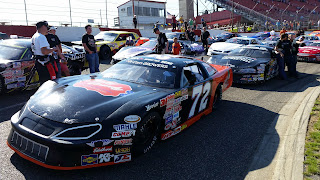 Jacob gives a lot of the credit for his great success to his crew and teammate.  "Matt had a great season too, as a team we had a great season," said Jacob "our cars are very similar so we can bounce things off each other and work together to make the best set-ups we can."  Jacob's brother Matt had three feature wins even though he raced part of the season with a broken wrist on one hand and a broken forearm on the other hard from a motocross accident.

Goede not only won the Elko Super Late Model track championship but also won the NASCAR Whelen All American series Minnesota State Championship and he placed 6th in the National point standings for division I.  "It goes to show that hard work and having a fast car pays off," said Jacob.  Goede plans on racing for his third consecutive championship at Elko Speedway in 2016.

Previous winners of MN Asphalt Driver of the Year.

Email ThisBlogThis!Share to TwitterShare to FacebookShare to Pinterest
Labels: 2015, Driver of the year, Jacob Goede