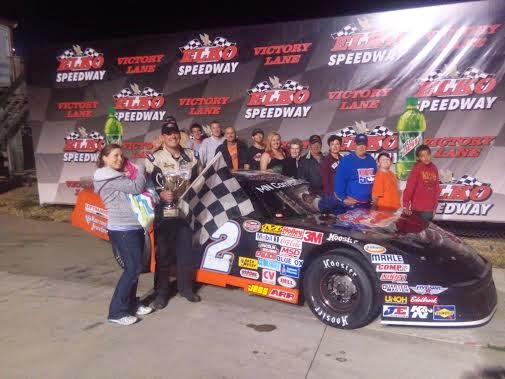 Jacob Goede from Carver (MN) has been named the 2014 Minnesota Asphalt Driver of the Year by Speed Talk on 1360 Radio.
Goede returned to his Minnesota racing roots in 2014 after spending much of the last decade racing in regional Late Model touring series.  Goede won the highly contested Elko Speedway Super Late Model division, scoring seven wins along the way including the prestigious Dwain Behrens memorial race. 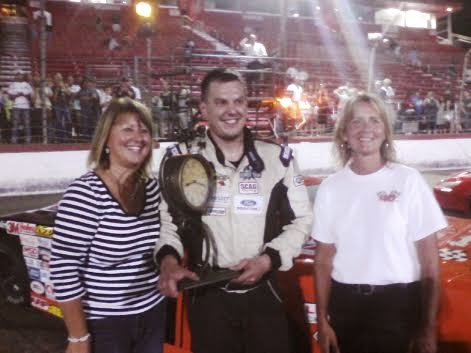 For the first time in his career, this homecoming made it possible to race side by side the entire season with his brother Matt.  The younger Goede also had a successful year, winning two times and finishing fourth in points at Elko Speedway.  Jacob and his wife Erica had a new addition to their family with another baby girl born just after the race season concluded.
Jacob Goede was also crowned the NASCAR Minnesota state Champion, he took part in the ceremony at the NASCAR Hall of Fame located in Charlotte North Carolina.  "It was fun," said Goede "NASCAR does a great job, they treat you like royalty and it really makes you feel like you accomplished something."
Jacob plans on defending his Super Late Model point title at Elko Speedway in 2015.  "We want to focus on Elko again this year," said Goede "plus I would like to race the Thunderstruck 93 and the Oktoberfest race at the end of the year."
2015 has started out the right way for both the Goede brothers, they have been busy winning snowmobile races.  Jacob and Matt raced in seven different divisions of vintage snowmobiles at the recent Eagle River (WI) classic vintage weekend.  The duo took home five titles including the Vintage World Championship where speeds reached 90 mph on a banked 3/8 mile oval track.
For Jacob it's about time to put the sleds back in storage and start concentrating on the Super Late Model, it took him nearly a decade to win his first Championship.  He is determined not to wait that long for the second one.

Speed Talk on 1360 is a weekly Saturday morning radio show April through September with Jason Searcy and Dean Reller covering Motorsports in Minnesota on KRWC 1360 AM radio.