(BRAINERD, MN) May 26,2012-----Michael Self might not be a name familiar to race fans in the Midwest, but he already has caught the eye of one prominent team owner and with a come from behind win on the Competition Road Course at Brainerd International Raceway in the NASCAR K & N Pro Series West division, Self might well be on his way to bigger things in the coming years. 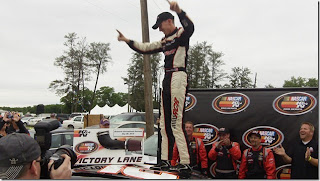 Due to rain washing out qualifying, the field was set by points for the inaugural Brainerd 125.  Starting up front was sixteen-year-old points leader Dylan Kwasniewski, flanked by veteran and defending series Champion Greg Pursley.  As the field took the green, it was Pursley who took the lead with Kwasniewski right behind.  The battle for the top spot intensified as Kwasniewski pressed hard and took over the lead a handful of laps into the 50 race.  Anthony Giannone’s off track excursion brought out the race’s only yellow on lap 6.  On the restart, it was Pursley regaining the lead as Kwasniewski again challenged hard.  Just like before, a couple of laps into the run it was Kwasniewski taking over the point.   Pit stops played a role about two-thirds of the way into the race as both leaders pitted for fuel and Pursley won the race off pit road and again took the lead.  For the third time, it was Kwasniewski making a hard charge and once more he took the lead back.  Pursley’s car began to fade at that point as Self slowly began to reel in the front pair.  With nine laps remaining, Self moved past Pursley and then set his sights on Kwasniewski.  Kwasniewski looked to be well on his way to the win, however transmission problems slowed his pace, opening the door for Self.  With less than a lap and a half remaining, Self made his move in turn nine, which is known as the “Keyhole” turn.  Self was able to take the lead and finish off the sprint to the finish to score his first NASCAR K & N Pro Series West win. 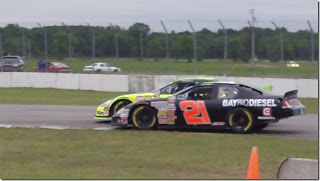 “Before the race, my crew chief and spotter pounded into my head that I need to be careful and cautious and run cautious laps and that’s exactly what we did,” said the 21-year-old Richard Childress Racing developmental driver.  “The 03 car (Kwasnieski) had a big, big lead on us and we started to track him down and he made one little tiny mistake and that’s all it took and we took advantage of it.”  Pursley managed to nurse his car home a distant third while Derek Thorn and David Mayhew rounded out the top five.

Here is an audio recap of the race including interviews with Self, Kwasnieski and Pursley https://soundcloud.com/speedtalkon1360/bir-kn-2012 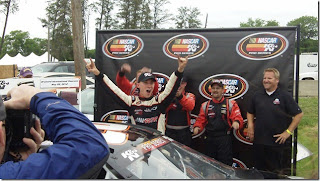 Here is a link to a Speedtalk Video of the entire field of cars or the K & N race at BIR  http://www.youtube.com/watch?v=9qb4v18chh4&feature=youtu.be