By Dean Reller
No,  it’s not Dale Jr. or some guy named Jimmie, but a real NASCAR touring series is making a stop this weekend  at Brainerd International Raceway.  The NASCAR K &N Pro Series West will be making its first ever appearance at the historic Brainerd track on Saturday May 26th.  The 50 lap (125 mile) event will not only be the first for the series, but a first for the drivers as none of the participants have ever driven the 2.5 mile Competition Road Course before.
The K & N Pro Series West has been around since 1954 with its roots planted firmly along the west coast.  It’s been known by a few different sponsored names, but the series has always been a top tier division for racers from the country’s left coast.  Many notable drivers have used this series as a stepping stone to greater success in many of NASCAR’s other top divisions.  Ron Hornaday Jr, Kevin Harvick, Derrike Cope, Chad Little and Brendan Gaughan are just some of the names who have had success in the series before moving on. 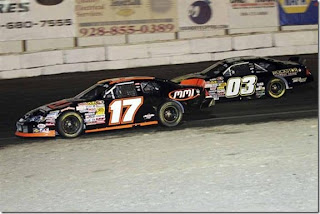 Today the series has a mix of young up and coming drivers along with a good contingent of seasoned veterans.  One of the young drivers to watch will be sixteen-year-old Dylan Kwasniewski (#03 above) who currently leads the point standings following last week’s race at Iowa Speedway.  That race was a combination event between the K & N West Series and its counterpart, the K & N East Series.  Forty-four-year-old Greg Pursley (#26 below) is the defending series Champion and currently sits 15 points behind his teammate Kwasniewski in the standings, just six races into the 15 race schedule.  Pursley won a road race earlier this year, the Utah Grand Prix.   Other notables to watch at Brainerd will be (#17 above) David Mayhew, who has made a few Nationwide Series starts, Eric Holmes who has four-runner up finishes on road courses and veteran drivers Jonathan Gomez, Carl Harr, Daryl Harr and Brett Thompson who has 115 career starts. 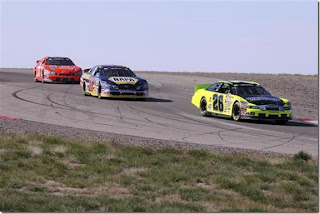 The NASCAR race is just one event during the weekend at BIR with Drag Racing and SCCA Road Racing also included in the Friday-Sunday Street Car Showdown.  The NASCAR events will run Saturday only.  NASCAR practice is from 9:45-10:45, qualifying is slated for 1:45, with the race set to take the green at 4:40.  Remember, that since this is a road course, the race will be run RAIN or SHINE.
Speed Talk on 1360 will be on hand at BIR doing the show LIVE from the track.  Listen for driver interviews and more 10-11 AM on Saturday.  Hear the live web-cast here www.krwc1360.com

*Photos courtesy of Getty Images
Posted by Jason at 6:51 AM