Behind the scene's at Oktoberfest The 41st annual Oktoberfest was a big success for MN drivers.  Danny Fredrickson took home the trophy in the ASA Midwest tour finale.  In picture above Dan, David and his crew changed out a bad alternator just before the main event on Sunday.

MN drivers grabbed four of the top 5 spots in the ASA Midwest tour race on Sunday.  Including Jacob Goede wrecking during the "Dick Trickle 99" race on Friday night and then going back to MN to get his brother's (Matt) car and finishing second on Sunday.  Fredrickson won the "Trickle 99" race as well.

Here is a you-tube video of the big wreck on Friday night http://www.youtube.com/user/jacklyndaniels#p/a/u/1/1dGW47UsPYE
Nick Murgic finished third and had a great run on Friday night to win the race on the track but was DQ'd in the tech shed for being 8lbs off on "left side" weight after the third segment.  Nick Panitzke won the "futures" race on Thursday night at Oktoberfest.
Brent Kane finished in second place in the area Sportsman race to end his incredible season and Jeff Heaney of Caledonia (MN) won the Hornets feature on Thursday night.  Bill Collins from South St Paul (MN) finished 5th in the ASA Midwest Truck series finale.
Dean Reller took these "behind the scenes" pictures down in La Crosse (WI) 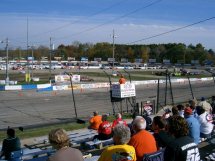 A Fan's view of the action 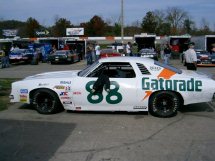 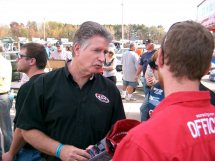 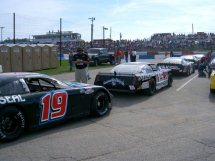 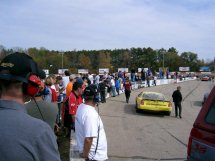 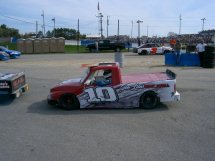 Mini Truck getting ready to race on the 1/4 mile 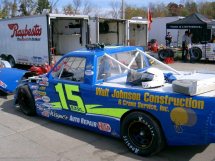