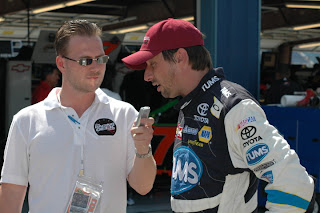 Our Buddy Jordan Bianchi from http://www.theracinggeek.com/ is at Chicagoland Speedway covering all the NASCAR action.
David Reutiman wins the Sprint Cup race and Kyle Busch wins the Nationwide race.

Here is some post-race video from the Nationwide race on Saturday night. Look who is lurking in the background behind Danica Patrick.