2018 MN Asphalt Driver of the Year 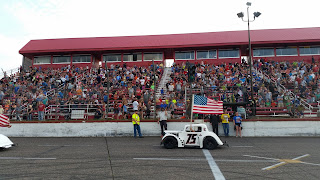 Baiden Heskett, 27, from Farmington (MN) has been named by Speed Talk on 1360 radio the 2018 MN Asphalt Driver of the year.  The hometown for Heskett is Alvarado (TX) but has lived in Minnesota the last two years. Heskett had an incredible year of racing in the Great North Legends division at Elko Speedway.  He won his first Championship by a whopping 288 points, won 11 feature events, scored an incredible 163 passing points, (never finishing worse than his starting position) and he had a TOP 5 finish in all 24 feature events he raced in at ELKO.  “Racing in Minnesota has helped me become a better driver,” said Heskett “there is a bunch of talent up here and ELKO is the best track to race at in the nation, it’s racy and you can go side by side.”

Heskett also excelled at the National level, he was awarded the most prestigious title in all of Legends Car racing.  The 2018 INEX Asphalt Pro division points title becoming the first ever Minnesota based driver to do so. 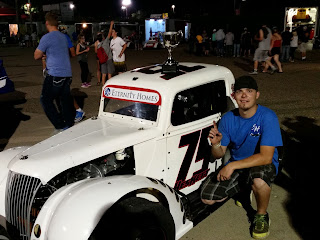 In fact, racers from this area did well as a whole with Ryan Braseth from Ulen (MN) winning the Young Lions overall title on dirt and Great North Legends owner Tim Brockhouse from Shakopee (MN) winning the overall asphalt Masters title.  Brockhouse, who won the MN Asphalt Driver of the Year award in 2016, is proud of his successful protege “I taught him everything I know, almost.”

Baiden Heskett plans on staying in Minnesota for the 2019 season and is setting even higher goals, he is gunning for both the Asphalt and Dirt Pro Division INEX titles.  “Texas will always be my home, but I think I can call Minnesota my home now too.” said Heskett.

Past winners of the MN Asphalt Driver of the Year: