Danny Fredrickson from Lakeville (MN) was presented with his fifth guitar trophy as winner of the Thunderstruck93 memorial race at Elko Speedway in honor of Dan Ryan and benefiting the "a race worth winning" organization that supports families in their fight with A.L.S. 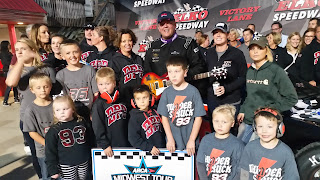 Under cloudy skies and rain looking imminent the ARCA Midwest Tour race was shortened to 93 laps before it began.  Midwest tour point leader and two time defending Champion Ty Majeski #91 broke a rear end in his primary car during practice and had to switch to a back up car, he still was the fast qualifier with a time of 13.736, and started the race 13th.  Rookie Super Late Model driver Chris Marek #3 started from the pole position, fought back former Midwest tour Champion #77 Jonathan Eilen and then led the first twenty laps.
Danny Fredrickson #36 is a three time Midwest tour Champion himself and also an Elko Speedway Champion in 2003.  Fredrickson started the race 7th and quickly moved to the front of the field, he grabbed the lead at lap twenty and took off as Majeski and three time Elko Speedway Champ #72 Jacob Goede were making their way through this star studded field of Super Late Models.
On lap sixty Fredrickson had a big lead and Majeski had made his way up to second place.  Then with twenty to go Fredrickson caught some faster cars at the tail end of the lead lap and Majeski was right on his back bumper.  These two titans fought it out until the end with Fredrickson finishing just ahead of Majeski, the margin of victory was only .182 seconds with Goede finishing third.  The TOP 3 Podium was the same three drivers as last year, only this year Fredrickson came out on top.
It was the fifth win of the eight Thunderstruck93 events for Fredrickson who celebrated with the Ryan Family in Elko victory lane.  Fourteen of the 27 cars finished on the lead lap.  Only three drivers have competed in all 8 Thunderstruck events, they are Fredrickson, Nick Murgic and Joel Theisen.
TOP 10 Finishers:
1- Dan Fredrickson
2- Ty Majeski
3- Jacob Goede
4- Nick Barstad
5- Chris Weinkauf
6- Casey Johnson
7- Billy Mohn
8- Nick Panitzke
9- Travis Dassow
10- Nick Murgic
The Big 8 Late Model Series ran a 58 lap race during Thunderstruck93 and it was an epic battle between #2 Michael Bilderback from South Beloit (IL) and Michael Ostdiek from Lakeville (MN).
J Herbst #82 a former La Crosse Speedway Champion from West Salem (WI) actually had the field covered the first half of the race before mechanical problems dropped him from the top spot on lap 34.  That's when former Big 8 series Champion and Rockford (IL) Speedway Champion #2 Bilderback took the lead, he was closely followed by #18 Michael Ostdiek who has had an incredible season at Elko, winning four features and finishing third in the National NASCAR Whelen All American Series point standings for Division II.
These two raced hard and had some contact, more than once, on the final lap.  It was an incredible run to the checkers with Bilderback crossing the finish line just .018 seconds ahead of Ostdiek for the win.
TOP 10 Finishers
1- Michael Bilderback #2
2- Michael Ostdiek #18
3- Joe Neisius #75 -Fast Qualifier
4- Dillon Hammond #75
5- Michael Beamish #40
6- Ryan Kamish #42
7- L.B. Berthiaume #99
8- Jon Lemke #17
9- Jeremy Miller #5
10- Bryan Wrolstad #13

Brent Kane #99 from Lonsdale (MN) won his second feature of 2016 on the final night of racing in the Genz-Ryan Thunder Car division.  Kane jumped out front right away and never looked back.  Jeremy Wolff #32 from Chaska (MN) finished second in the feature and secured his first ever Elko Speedway Championship.  Conrad Jorgenson #3 was third, Eric Campbell #25 was fourth and #15 Cole Neisius finished fifth in this 18 car field.
Jeremy Wolff won a Hobby Stock Championship at Raceway Park in Shakopee (MN) in 2008, this is just his third full season racing at Elko, he had finished second in points the previous two years before scoring five wins and winning the Championship this year.  Wolff finished 31 points ahead of Kane in the race for the title, Eric Campbell was third in points followed by #07 Dillon Sellner in fourth and #3 Conrad Jorgenson fifth.
Joey Prusak #6 from Minnetonka (MN) won the final Pepsi Power Stock main event of 2016, it was his third win of the season.  Former Champion #88 Nick Oxborough finished second .457 behind Prusak, #54 Tim Hollen was a strong third with #8 Taylor Goldman finishing fourth and #62 Tom Doten from St Paul (MN) rounding out the TOP 5.
It is very appropriate that Tom Doten would score another TOP 5 finish in the last race, it is his specialty, he scored 17 TOP 5 finishes in 24 races this season, the most of any driver in the division and that helped him secure his first career Elko Speedway Championship.
Rookie driver Bryce Blohm #37 from Lakeville (MN) had a great season, he scored five wins and was in the hunt for the title right up until the very end.  Blohm was only eight points behind Doten coming into the final feature but had some bad luck with a flat tire during the race, he finished 17th.
Doten wins the Power Stock Championship by 25 points over Blohm with #7 Brandon Petersen finishing third, Taylor Goldman #8 fourth and #6 Joey Prusak fifth in points.
Double features were raced at Elko Speedway during Thunderstruck93.  The first 20 lap race was as close as it gets, #4 Brady Fox-Rhode from Loretto (MN) won his third feature of the year just edging #13 Tim Brockhouse by a bumper at the line with #71 Derek Lemke just a whisker behind.  Cole Klein #8 finished fourth in the first feature with #16 Matt Allen wrapping up the TOP 5.
In the second nineteen car feature Derek Lemke from Shakopee (MN) was the winner, it was his seventh win this year at Elko Speedway.  Matt Berlin #16 from Mequon (WI) finished second with #4 Brady Fox-Rhode third, #13 Tim Brockhouse fourth and #26 Will McCully in fifth.
The Great North Legends are one of the most exciting divisions at Elko Speedway with intense side by side action every race.  The Great North Legends are the premier division on the last night of racing at Elko Speedway next Saturday night October 1st as they will crown a Champion.  Derek Lemke has an impressive 90 point lead going into that final night, as long as he starts he will win his third consecutive Championship at Elko Speedway.
Justin Schelitzche #14 from Lester Prairie (MN) won the Hornets main event.  Schelitzche outran #36 Brandon Olson for his fourth win of the season at Elko.  Olson finished second followed by #7 Ridge Oien who was in a close battle with #55 Brandon Plekkenpol in fourth and #36 Alex Vincent in fifth.
Schelitzche now has a 27 point lead over Olson going into the final night of racing at Elko Speedway.
As always, these results and points are unofficial, the official results will be posted later in the week at ElkoSpeedway.com
Coming up next is the final night of racing at ELKO.  Its a MN Lottery Eve of Destruction presented by Leo's South.  In addition to racing in the Bando's, Hornets and Great North Legends fans will see the much anticipated Trailer Race, School Bus Figure 8 races, Burnout Contest, Justin Sayne stuntman, The Green Mamba Jet Car, Rock-n-Roll Fireworks, Spectator Drags and LIVE music from Lost Highway.  Gates open at 5pm with action at 6pm.
Get more information at ElkoSpeedway.com, follow Elko Speedway on social media or download the free ELKO Racing app.  Elko Speedway is a NASCAR sanctioned 3/8th mile progressive banked asphalt oval race track located in Elko (MN), 30 minutes South of Downtown Minneapolis (MN) just off of I-35 and County Road 2.
Posted by Jason at 5:36 PM