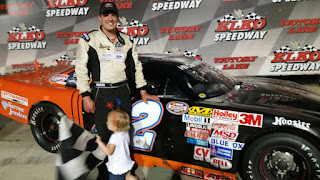 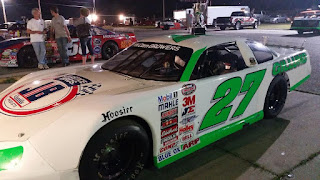 Goede won his 6th feature in 9 races in the NASCAR Whelen All American Series racing at Elko Speedway.  Derek Lemke lead most of the 30 lap main event but Goede made his move and passed for the lead with 2 laps remaining, Goede eventually won by .719 seconds over Mark Lamoreaux who got past Lemke on the final lap.

#27 Paul Paine from Mound (MN) won the other 30 lap Super Late Model race.  Paine started up front in the 18 car field but raced Steve Anderson side by side for 7 laps before taking control of the race.  Paine held off Anderson by .752 seconds at the finish line for his first win of the season "I figured this would be my last year racing," said 49 yr old Paine "but maybe I won't quit yet!"

Here is an audio interview with Paul Paine https://soundcloud.com/speedtalkon1360/paul-paine-winner-at-elko

Jacob Goede started 13th and made his way up to 5th at the finish.  Goede now has a 58 point lead over Nick Panitzke in the race for the Championship. 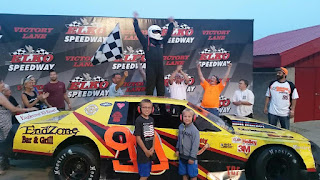 Brent Kane from Lonsdale (MN) had a roller coaster week, he crashed out of the feature last Saturday night in the Genz-Ryan Thunder Car divsion.  He ended up in the hospital and spent much of the week nursing a concussion.  With Kanes' car beyond repair the Scott King team loaned their car to him before the races, the three time Elko Speedway Champion then took that unfamiliar car with a new Duct Taped Number 99 to victory lane.  Kane beat Eric Campbell to the finish line by 1.003 seconds to claim the win with point leader Jeremy Wolff taking third.  It was the fourth win of the season for Brent Kane. 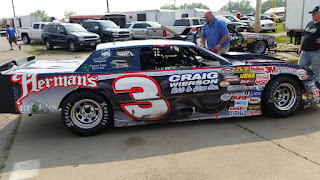 Conrad Jorgenson won for the 2nd week in a row in the other 20 lap Thunder Car feature.  Tina Davis lead until lap 3, then Jorgenson took off and won by an impressive 3.954 seconds.  Dillion Sellner finished 2nd with Davis in 3rd in the 16 car field.

Jeremy Wolff still leads in the Point Standings, but by only 9 points over Brent Kane.

Dusty Mann from Farmington (MN) won for the 2nd time in the Pepsi Power Stock division, he had a great side by side battle with Tim Hollen for much of the race, Mann eventually bested the 20 car field by 1.219 seconds at the finish line in Feature number 1. 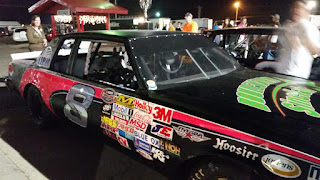 The Second Feature was won by Taylor Goldman from Minnetonka (MN), she raced defending Champion Nick Oxborough early in the race but then extended her lead to 1.399 seconds at the finish line.  "I'm thankful that I got a win early this year, and I hope I can get some more," said Goldman "I really have to give this one to my Dad, our starter went out in the first feature, we didn't know if we could fix it, luckily my Dad had a spare one, if he wouldn't have put that starter back in we wouldn't have raced the second feature."


Here is an audio interview with Taylor Goldman https://soundcloud.com/speedtalkon1360/taylor-goldman-winner-at-elko

Tom Doten had some bad luck and lost some of his cushion in the Point Standings, Taylor Goldman is now only 9 points back and 15 yr old Grant Brown is 11 points behind Doten.

16 year old Matt Allen from Chanhassen (MN) won his second Great North Legends feature event.  Allen lead flag to flag and won by .459 seconds in this 20 lap and 20 car main event.  Derek Lemke finished second and moved into the point lead, he is 10 points ahead of Allen in the Standings.  Previous leader Brady Fox-Rhode did not race and moved back to 7th in the Standings.

Matt Allen is a Type 1 Diabetic but that has not slowed his racing career one bit, he scored his first career win 3 weeks ago at Elko Speedway and was promptly congratulated by his racing idol NASCAR Xfinity driver Ryan Reed on Twitter.  Reed is also a Diabetic, the two met last year at Iowa Speedway.

Blake Dorweiler from Montgomery (MN) won the Hornets feature event.  Dorweiler and Ashley Bell raced door to door for much of the 15 lap event, Dorweiler eventually won by .69 seconds over Bell.

Justin Schlitzche finished 5th in the 18 car field and still holds onto the points lead, he is 20 points ahead of Bell in the race for the Championship.

Troy Tuma won his third Hornet Figure 8 feature event, he shot low on the last lap and just got past Brian Adams for the win.


For Full Results go to www.ElkoSpeedway.com and click RESULTS

Mark Goddard in a 2006 Dodge Charger and Brian McMenomy in a 1979 Cadillac won the Spectator Drags. 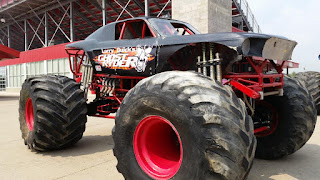 Larry and Shannon Quick from Aledo (IL) had a great competition that thrilled the capacity crowd in their two Monster Trucks.  Ghost Ryder driven by Larry won the Free Style Competition over Shannon in her truck named La Chica Loca.

The RentMyPartyBus.com Figure 8 School Bus races were crazy as usual and were a great lead-in to the awesome Fireworks show to end the Eve of Destruction night at Elko Speedway.

Next up at Elko Speedway located just 20 minutes South of the Twin Cities will be NASCAR racing in the Whelen All American Series on Saturday night July 11th, gates open at 5pm and action begins at 6pm.  A movie will follow the races at Elko Drive in Theater.  Get more information by going to ElkoSpeedway.com or call (952) 461-7223.

For interviews with Elko Speedway drivers each week, listen to Speed Talk on 1360 Saturdays 10-11am on www.KRWC1360.com
Posted by Jason at 3:27 AM