ARCA vs World of Outlaws at Elko Speedway

Two major, but very different, racing series came to our neck of the woods recently.  Seeing those cars on the same track lead me to a question that race fans have wondered about for many years.

How would the speed of the World of Outlaws Sprint Cars compare with the ARCA cars at the same facility?  That unique hypothetical question was answered this Spring at Elko Speedway. 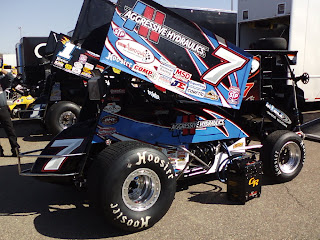 The 900 horsepower and 1400 lb WoO Sprint Cars raced a rain shortened 34 lap event on May 10th.  Fast time in qualifying was set by Sam Hafertepe at 12.507, thats 107.940 mph.  The 3/8 th mile track at Elko Speedway was incredibly smooth and fast with the top groove coming in perfectly by the end of the feature event, the fastest lap time during the race was 13.347 set by Cody Darrah in the Kasey Kahne car. 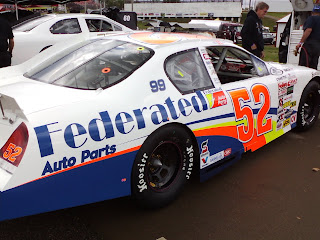 I am not saying that faster makes better racing, speed on the track is relative, my favorite moments in these two races were very similar.  Watching Ken Schrader (#52 photo) pit for tires on lap 64 and pick though the entire field to take the lead in the ARCA race was really cool.

Also seeing Tim Kaeding find the perfect line on the top of the track and just shoot past both Madsen and Dollansky (#7 photo) in the World of Outlaws race was just as memorable.
Both times I turned to the people sitting next to me and just said, "Wow, did you see that?"

Those moments are what us race fans live for, no matter the MPH.  Still now we are armed with the knowledge that now we know the answer.  I can say that there is one less hypothetical in the world of racing.
Posted by Jason at 10:18 PM