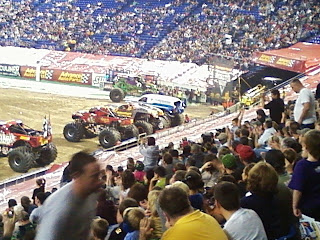 The January 22nd 2011 Monster Jam event scheduled at the Metrodome in Minneapolis (MN) has been cancelled because the collapsed roof will not be repaired until March.

The Monster Jam event at the Metrodome on November 13th 2010 took place on the night of the first big Minnesota snowstorm of the year, reducing the crowd to about a half-full stadium. 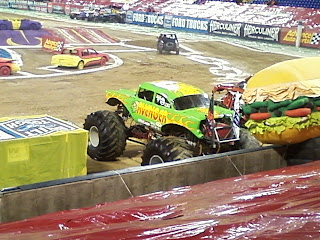 Here is a link to the race story of that event http://racefansradio.blogspot.com/2010/11/digger-wins-monster-jam-mpls.html

Its really a shame the Monster Jam has to be cancelled, but their is no other indoor local facility that could even come close to holding this event and the outdoor options wouldn't work in January for the drivers or the fans.  Its a long time untill the next scheduled Monster Jam event at the Metrodome, its December 2011.
Posted by Jason at 7:03 PM