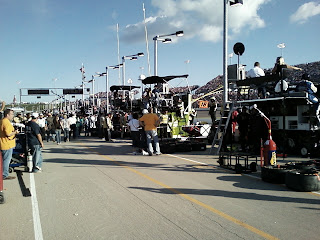 The Nationwide series will race at Iowa Speedway two times in 2011. The first race will be on Sunday afternoon (May 22nd), this is the day after the Cup All-Star race in Charlotte. I would think that some cup drivers would make the trip up to Iowa for this race.

The second race will be on Pocono weekend, Saturday (Aug 6th). This will most likely be a Saturday evening race with drivers flying back and forth to Pocono.

The NASCAR truck series will also return to Iowa Speedway again in 2011. This race will be during the New Hampshire weekend, Saturday (July 16th). I would think this would be an evening race at Iowa Speedway.

"Speedtalk on 1360" whole-heartedly endorses this wonderful Midwestern racetrack and we plan on broadcasting LIVE from Iowa Speedway again in 2011.